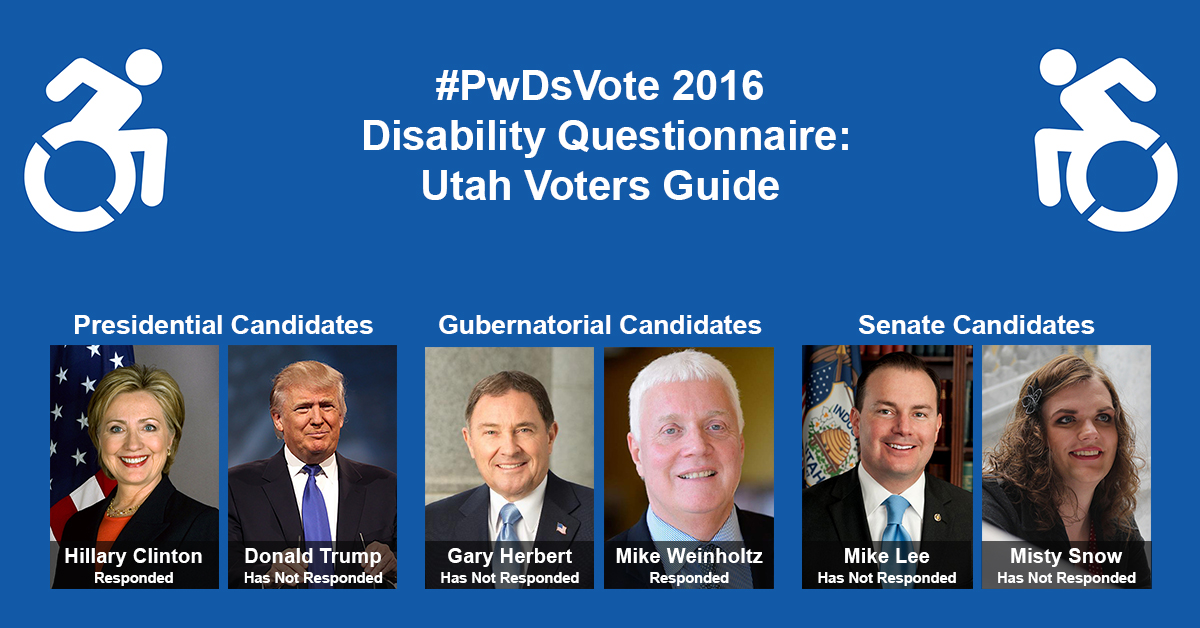 Washington, Oct 13 – As voters get ready to head to the polls in Utah, RespectAbility has released its Utah Disability Voter Guide for the upcoming gubernatorial, senate and presidential races. Candidates from both major parties for all of these races were sent the #PwDsVote Disability Campaign Questionnaire for people with disabilities. Democrat Mike Weinholtz, who is challenging incumbent Gov. Gary Herbert for the governorship of Utah, as well as presidential candidate Hillary Clinton, have completed the questionnaire. Herbert, as well as Democrat Misty Snow and incumbent Republican Sen. Mike Lee, have not yet responded, but they would be welcomed and included in future voter guides.

Utah’s 274,151 citizens with disabilities now have a chance to read Weinholtz’s responses and understand his positions on a variety of issues. RespectAbility has yet to receive responses from Gary Herbert, Mike Lee, and Misty Snow, but will post their responses as soon as they are made available.

In his responses, Mike Weinholtz talked about the importance of streamlining the government of Utah to make it more accessible for people with disabilities.

“The bureaucracy can be daunting for anyone, and for those with a disability, it can pose a serious barrier to ensuring that people have access to the resources they need,” he stated. “I also feel that expanding the definition of “disability” in state law to include chronic homelessness could help capture populations that are not currently being served in the state.”

Fully one-out-of-five Americans have a disability, and 52 percent of likely voters have a loved one with a disability. Only one-in-three working-age Americans with disabilities have jobs, despite the fact that the vast majority want to work. More than 11 million working age people with disabilities are now living on government benefits in our country.

RespectAbility President Jennifer Laszlo Mizrahi said, “People with disabilities in Utah are looking for jobs so they can achieve the American dream, just like anyone else. It is vital for them to know where the candidates stand on economic, stigma, education, safety, transportation, housing, healthcare, foreign affairs and other issues. Many candidates have hugely different ideas about how to deal with the issues. Sadly, some of Utah’s candidates are long overdue in telling voters with disabilities their ideas and plans. Thus, it’s extremely important to read the full answers we have in the guide, and to understand that other candidates were given the same opportunity to respond to this nonpartisan questionnaire, and that so far have declined to do so.”

Utah Shows Promising Effort for Disability Employment
There are 148,038 Utahans with disabilities who are between the ages of 18-64. Additionally, there are 12,500 Utahans ages 16-20 with disabilities. More than 68,000 Utah students have individual education plans (IEPs). However, many children with disabilities in Utah may have not yet received a disability diagnosis they need, and thus are not yet receiving the school accommodations and supports that they need to succeed. Many students who might need support to succeed academically instead find themselves trapped into a lifetime of poverty or flowing down the school to prison pipeline.

Utah has the opportunity to work hard to improve outcomes in terms of competitive, integrated employment for people with disabilities. Currently 44 percent of working-age Utahans with disabilities are employed compared to 77.5 percent of those without disabilities. Gov. Herbert has been active on these issues. View the rankings of all 50 states and compare.

RespectAbility, founded in 2013, is a nonpartisan, nonprofit organization working to end stigmas and advance opportunities for people with disabilities. It has submitted comments for all 50 state’s drafts of the Unified Plan as required under Section 102 of the Workforce Innovation and Opportunity Act (WIOA). According to the written state plan, Utah partnerships have grown between the state’s workforce system, the Utah State Office of Rehabilitation (USOR), the Division of Services for People with Disabilities, and the Division of Substance Abuse and Mental Health. Thanks to WIOA, Utah has the opportunity to build on those partnerships and to innovate around ways to continue improving outcomes in terms of competitive, integrated employment for people with disabilities.

One of the most important facets of WIOA is that it raises expectations for youth with disabilities and assists states to provide them with the supports they need to ensure success. Young Utahans with disabilities are an untapped resource that can be trained to bridge that gap. Indeed, a recent detailed study by the Kessler Foundation and the University of New Hampshire shows that 70 percent of working age people with disabilities are striving for work.

Remember to Vote
Utah residents can vote for the candidates of their choice either on the standard voting schedule or through early voting. Utahans have until November 1, 2016, to register to vote for the election. To register to vote, residents can apply in the town or city clerk’s office or online. More information regarding voting can be found at: Register to Vote. Voters also can cast an early vote from October 25 to November 4. Any registered Utah voter can cast an early vote. More information regarding early voting and poll locations can be found at: Early Poll Locations. Any Utahan who is unable to vote at a polling place may vote by absentee ballot. In order to receive an absentee ballot, you must apply for one online. More information regarding absentee ballots can be found at: Absentee Voting Information.