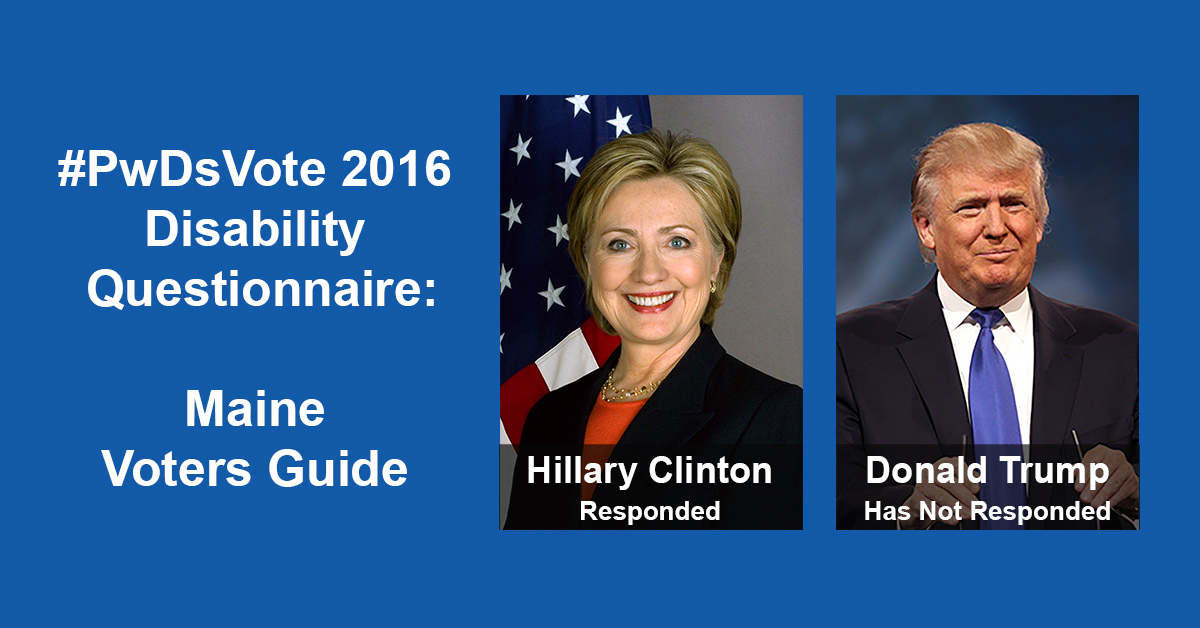 Washington, Oct. 14 – As voters get ready to head to the polls in Maine, RespectAbility is releasing its Maine Disability Voter Guide for the upcoming presidential election. Democrat Hillary Clinton has completed the #PwDsVote Disability Campaign Questionnaire, but Republican Donald Trump has yet to do so.

From the review of Maine’s Unified State Plan, it is clear that too many elements of the workforce system remain segmented and lack the lens of disability issues needed to better align programs. As Maine moves beyond the current draft of the Unified State Plan and looks to finalize WIOA implementation, there is a critical need to ensure the disability lens is applied to the work of the workforce system as a whole.

Remember to Vote
Maine residents can vote for the candidates of their choice either through the standard voting schedule or through early voting. If you would like to register to vote by mail or through a “voter registration drive,” the registration deadline is Oct. 18, 2016. However, you may register in person at your local town office, city hall, or other approved location at any time. For more information on registration: Maine Voter Registration.

While Maine does not have Early Voting in the sense of having certain polling places open on designated days prior to Election Day, Maine does have Absentee Voting both by mail and in person. To vote Absentee by mail, you must request a ballot by November 3, 2016, unless you have a specified excuse. You may vote in person, using an absentee ballot, at the municipal clerk’s office as soon as absentee ballots are available, 30 to 45 days before the election, until Thursday, Nov. 3, 2016. You don’t need to complete an absentee ballot application if you vote in person at the clerk’s office. For more information regarding Early/Absentee Voting, visit: Maine Early/Absentee Voting.