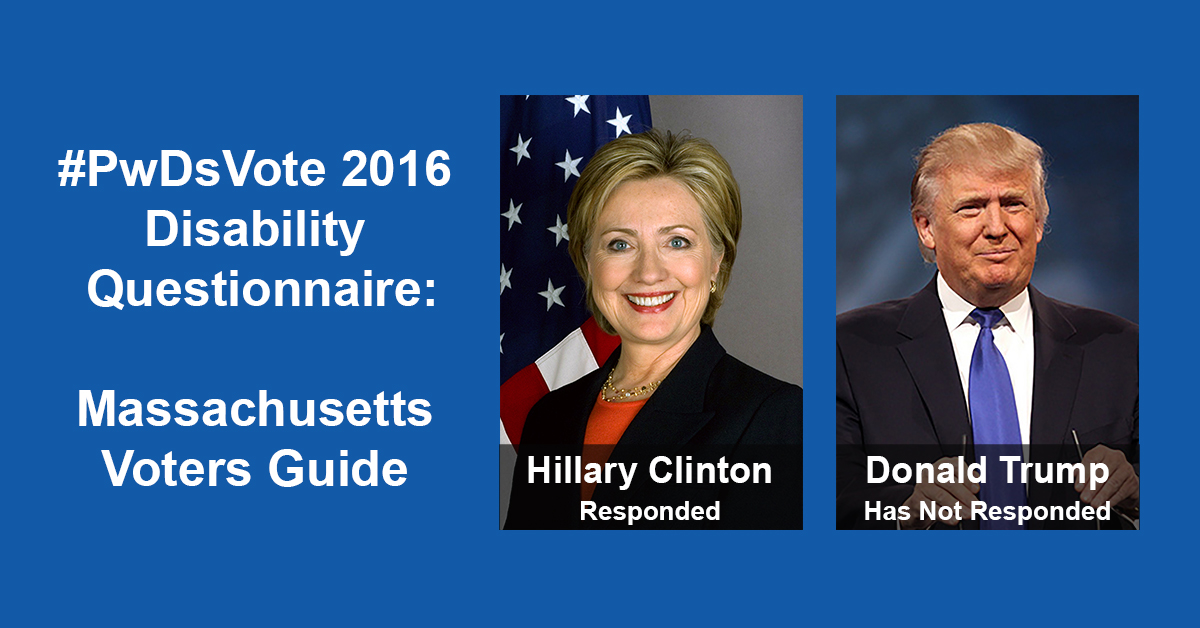 Washington, Oct. 14 – As voters get ready to head to the polls in Massachusetts, RespectAbility releasing its Massachusetts Disability Voter Guide for the upcoming presidential election. Democrat Hillary Clinton has completed the #PwDsVote Disability Campaign Questionnaire, but Republican Donald Trump has yet to do so.

Fortunately, the Commonwealth has already taken significant steps to end the policies that left far too many people trapped in sheltered workshops. These efforts, combined with the strategic opportunities offered by the Workforce Innovation and Opportunity Act (WIOA), mean that Massachusetts can invest heavily into improving the competitive, integrated employment outcomes for its citizens with disabilities. After all, there remains a staggering 43.5 percentage point gap in the labor force participation rates (LFPR) between people with and without disabilities. This gap will not be closed unless resources are committed to best practices and cost-effective models.

In order to promote best practices and the inclusion of people with disabilities in state workforce systems, RespectAbility has submitted comments for all 50 state’s drafts of the Unified Plan, which is required under Section 102 of WIOA. This new law represents the intersection of hope and history for people with disabilities.

The Commonwealth has been at the forefront of many our nation’s greatest progressive challenges in terms of inclusion, opportunity, and diversity. However, the Commonwealth has not yet fully achieved the high outcomes and improved employment opportunities that its citizens with disabilities want and need. Such poor outcomes cause a needless school to prison and/or poverty pipeline. Failing to properly train and prepare job seekers with disabilities costs the Commonwealth’s economy incredible talent and shatters the aspirations of so many Bay Staters with disabilities who want to pursue the American Dream, just like everyone else. We remain concerned with some of what we have seen in the Combined State Plan, but are optimistic that voters will continue to encourage politicians to include people with disabilities and the issues we face in their political agendas.

Remember to Vote
Massachusetts residents can vote for the candidates of their choice either through the standard voting schedule or through early voting. The registration deadline is Oct. 19, 2016. You may register online, in person or by mail. For more information on registration: Massachusetts Voter Registration.

Residents may vote early from Oct. 24, 2016 through Nov. 4, 2016. For more information, contact your local election official. Residents may also vote absentee. In order to be eligible to vote by absentee ballot in Massachusetts, a voter must be prevented from voting at their polling place on Election Day, due to: Absence from the voter’s city or town on Election Day; Physical disability; or Religious belief. Absentee ballots must be requested in writing by either the voter or the voter’s family member. All requests for absentee ballots must be received by your local election official no later than 12:00 p.m. on Nov. 7. For more information: Absentee Voting in Massachusetts.