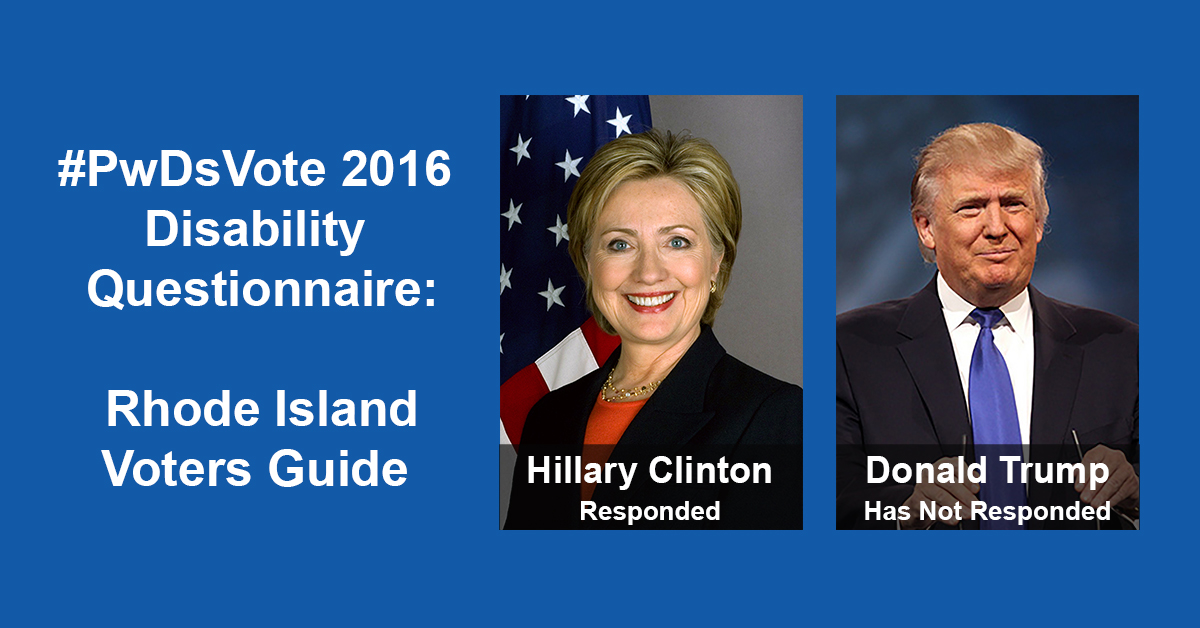 Washington, Oct. 14 – As voters get ready to head to the polls in Rhode Island, RespectAbility is releasing its Rhode Island Disability Voter Guide for the upcoming presidential election. Democrat Hillary Clinton has completed the #PwDsVote Disability Campaign Questionnaire, but Republican Donald Trump has yet to do so.

Rhode Island’s voters are looking to know where the candidates stand on important disability issues in order to increase opportunities for competitive, integrated employment for people with disabilities and foster a more inclusive society.

Rhode Island’s WIOA plan is structured around three “guiding strategies” that include a “demand-driven sector-based strategy,” “a career pathway strategy,” and “an effective performance measurement strategy.” The disability lens must be actively present in each of these strategies.

In light of recent events, the spotlight is on Rhode Island’s effort to expand employment opportunities for her citizens with disabilities. U.S. v. Rhode Island is the nation’s “first statewide settlement agreement vindicating the civil rights of individuals with disabilities who are unnecessarily segregated in sheltered workshops and facility-based day programs.” With this agreement in place, Rhode Island needs to move forward with focused strategies to empower youth with disabilities to transition into the workforce and become a labor resource well trained to meet employer talent needs.

Remember to Vote
Rhode Island residents can vote for the candidates of their choice either through the standard voting schedule or through early voting. The deadline to register to vote in Rhode Island was Oct. 9, 2016. For more information, visit: Rhode Island Voter Registration. While Rhode Island does not permit Early Voting, you may apply to vote by mail (Absentee). You do not need an “approved excuse.” Simply fill out the application. For more information, including the application and other instructions: Rhode Island Absentee Voting. Please note: All mail ballots must be received by the State Board of Elections at 50 Branch Avenue Providence, R.I. 02904 by 8:00 p.m. the night of the election (Nov. 8, 2016).