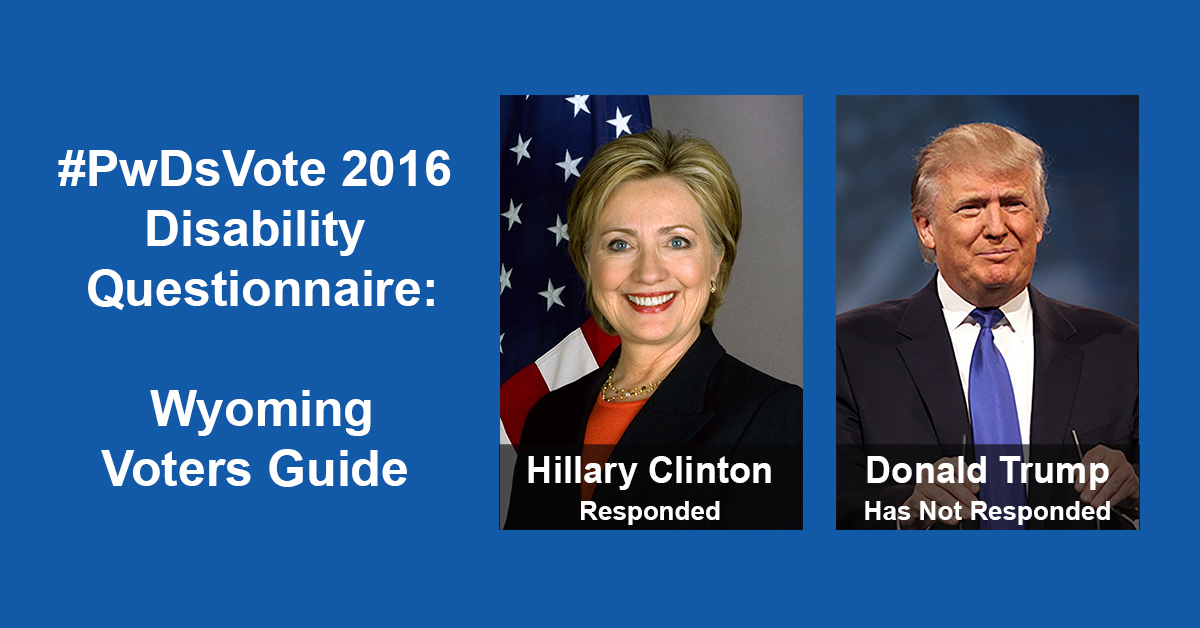 Washington, Oct. 14 – As voters get ready to head to the polls in Wyoming, RespectAbility is releasing its Wyoming Disability Voter Guide for the upcoming presidential election. Democrat Hillary Clinton has completed the #PwDsVote Disability Campaign Questionnaire, but Republican Donald Trump has yet to do so.

Twenty-four candidates for Senate, as well as nine candidates for governor, from both sides of the aisle (20 Democrats, 13 Republicans) also completed the down ballot questionnaire, showing that disability rights is a nonpartisan issue. The responses also are geographically-diverse, coming from states all around the country, as politicians are paying more and more attention to the disability community.

Wyoming Holds Promise for Citizens with Disabilities
According to the most recent publicly available census data, Wyoming ranks fifth in the country in terms of the state’s employment rate of people with disabilities. Fully 45.2 percent of the 38,675 working age people with disabilities are employed in Wyoming. Because of Wyoming’s good work, the 8,200 youth with disabilities between the ages of 16 and 20 living in Wyoming have increasing chances to successfully transition into the workforce. Each year, one quarter of them will transition out of the school system and into an uncertain future. It is important for Wyoming to continue and build upon its tremendous work. Wyoming’s voters are looking to know where the candidates stand on important disability issues in order to increase opportunities for competitive, integrated employment for people with disabilities and foster a more inclusive society.

In order to promote best practices and the inclusion of people with disabilities in state workforce systems, RespectAbility has submitted comments for all 50 state’s drafts of the Unified Plan, which is required under Section 102 of the Workforce Innovation and Opportunity Act (WIOA). Founded in 2013, RespectAbility is a nonpartisan, nonprofit organization working to end stigmas and advance opportunities for people with disabilities. This new law represents the intersection of hope and history for people with disabilities. Wyoming‘s Unified State Plan is a great example of that hard work, dedicated effort, and specific policies needed to realize those hopes.

Despite having limited resources and small populations, Wyoming is far ahead of many states in terms of expanding competitive, integrated employment for people with disabilities.

RespectAbility expects Wyoming to build upon its success as the Wyoming Employment First Task Force, which was created two years ago, now fosters even more collaboration between the public and private sectors to craft solutions for employing people with disabilities. Wyoming also has benefitted from the MentorABILITY program, which emulates the strategies used by Project SEARCH. Strong leadership through an earlier Business Leadership Network also brought best practices and enthusiasm to the state, which should be commended.

Today fully 2,400 youth with disabilities, between the ages of 16 and 20, are preparing to enter the workforce in Wyoming. However, Wyoming returned $858,951 to Washington — money that was meant to help people with disabilities find employment. With the new workforce law, Gov. Matt Mead now has the chance to ensure that Wyoming sustains it success and creates even more jobs. Because Wyoming has citizens who care deeply about the success that inclusive hiring can bring employers, it could rise to the top slot in the future.

Remember to Vote
Wyoming residents can vote for the candidates of their choice either through the standard voting schedule or through early voting. The deadline to register to vote in Wyoming for the upcoming General Election is Oct, 25, 2016, two weeks prior to Election Day. Register in person at your local County Clerk’s office, by mail or at the polls on Election Day. For more information, including the application form, visit: Wyoming Voter Registration Information.