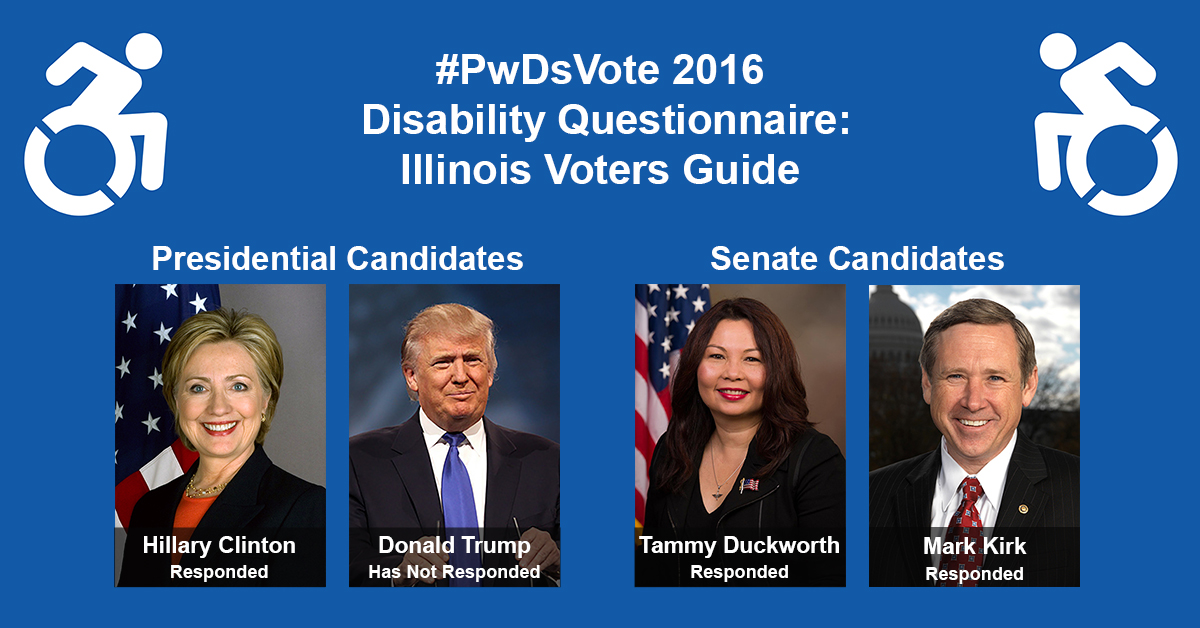 Washington, Oct. 18 – As voters get ready to head to the polls in Illinois, RespectAbility has released its Illinois Disability Voter Guide for the upcoming senate and presidential races. Democrat Tammy Duckworth, who is challenging incumbent Republican Sen. Mark Kirk, as well as presidential candidate Hillary Clinton, all have completed the #PwDsVote Disability Campaign Questionnaire for people with disabilities. The race between the two senate candidates is unique, as both candidates have a disability.

The presidential questionnaire was created during the primary season and asked all of the presidential candidates to comment on 16 disability questions. Former Secretary of State Hillary Clinton responded by addressing all of the questions. Despite numerous requests in person and by phone and email, the Trump campaign has not yet filled out the questionnaire. The American Association of People with Disabilities and the National Council on Independent Living also has a nonpartisan presidential questionnaire, which both Clinton and Trump have completed.

By both Duckworth and Kirk responding, Illinois’ 1,381,787 citizens with disabilities now have a chance to compare them on a variety of key issues.

In her response, Duckworth talked about how the stigma she experienced as a person with a disability helped shape her beliefs.

“Having experienced the stigma surrounding people with disabilities myself, I am devoted to ensuring that every American has access to an independent life, quality employment and social and legal equality,” she responded. “A hallmark of my service in Congress has been fighting for fairness for those with disabilities and I would continue that work in the Senate.”

Kirk also mentioned his experience with disability as a primary factor informing his policy efforts.

“As a stroke survivor I know better than most the value of research and rehabilitation in helping patients return to work and lead fulfilling lives,” he stated. “Stroke patients and individuals recovering from other catastrophic medical events deserve access to the best rehabilitation available. My experience has increased my dedication to improving the lives of people living with disabilities.”

RespectAbility President Jennifer Laszlo Mizrahi said, “It is vital for us to know where the candidates stand on the disability aspects of economic, stigma, education, safety, transportation, housing, healthcare, foreign affairs, criminal justice and other issues. Candidates have hugely different ideas about how to deal with the issues. Thus, it’s extremely important to read their full answers so you can understand their vast differences.”

There are more than 96,000 youth between the ages of 16-20 with disabilities in Illinois. Each year a quarter of them will age out of school looking for employment options. More than 255,000 Illinois students have individual education plans (IEPs). However, some Illinois children with disabilities may not yet have received a disability diagnosis they need, and thus are not yet receiving the school accommodations and supports that they need to succeed. This can lead to a lifetime of poverty or flowing down the school to prison pipeline.

RespectAbility, founded in 2013, is a nonpartisan, nonprofit organization working to end stigmas and advance opportunities for people with disabilities. It has submitted comments for all 50 state’s drafts of the Unified Plan as required under Section 102 of WIOA. There are many elements of the Unified State Plan as written that address the essential challenges impacting economic opportunities to empower Illinoisans with disabilities. Good work is being down around the Disability Employment Initiative (DEI) grant, adopting a career pathways model and partnerships to develop a common intake system. However, at the same time, there remain many issues where the disability lens is needed on the overall work of Illinois’ workforce system. There is a risk that the task force structure referenced throughout the Unified State Plan might reinforce silos rather than breaking them down.

One of the most important facets of WIOA is that it raises expectations for youth with disabilities and assists states to provide them with the supports they need to ensure success. Indeed, as Illinois’s Baby Boomers retire and the state’s economy evolves, employers are starting to experience increasing talent shortage. Illinoisans with disabilities are an untapped resource that can be trained to bridge that gap. Indeed, a recent detailed study by the Kessler Foundation and the University of New Hampshire shows the 70 percent of working age people with disabilities are striving for work.

Evidence shows that people with disabilities can provide a wonderful solution to companies and other employers that want to succeed. The diverse skills, greater loyalty and higher retention rates of people with disabilities are already starting to meet employer talent needs in increasing numbers around America. With WIOA, Illinois can benefit from that progress if it truly breaks down silos within government agencies and partners, and lets innovation, based on evidence-based practices, take place.

Remember to Vote
Illinois residents can vote for the candidates of their choice either on the standard voting schedule, early voting or through absentee voting. Illinoisans have until Oct. 23, 2016, to register online to vote for the presidential general election. You can register to vote online at: Online Voter Registration Application. More information regarding voting can be found at: Voter Registration. Any registered Illinois voter can cast their vote early for convenience. The early voting period lasts from Sept. 29 to Nov. 7. Early voting locations vary by county. Early voting locations can be found at: Early Voting Locations. More information regarding early voting can be found at: Early Voting in Illinois. If you cannot vote early or on election day you may apply to vote through absentee ballots. Any registered voter may apply for an absentee ballot. Applications must be submitted no later than Nov. 3, and ballots must be submitted and postmarked no later than Nov. 7 in order to count. More information including the absentee ballot application can be found at: Get Your Absentee Ballot in Illinois.