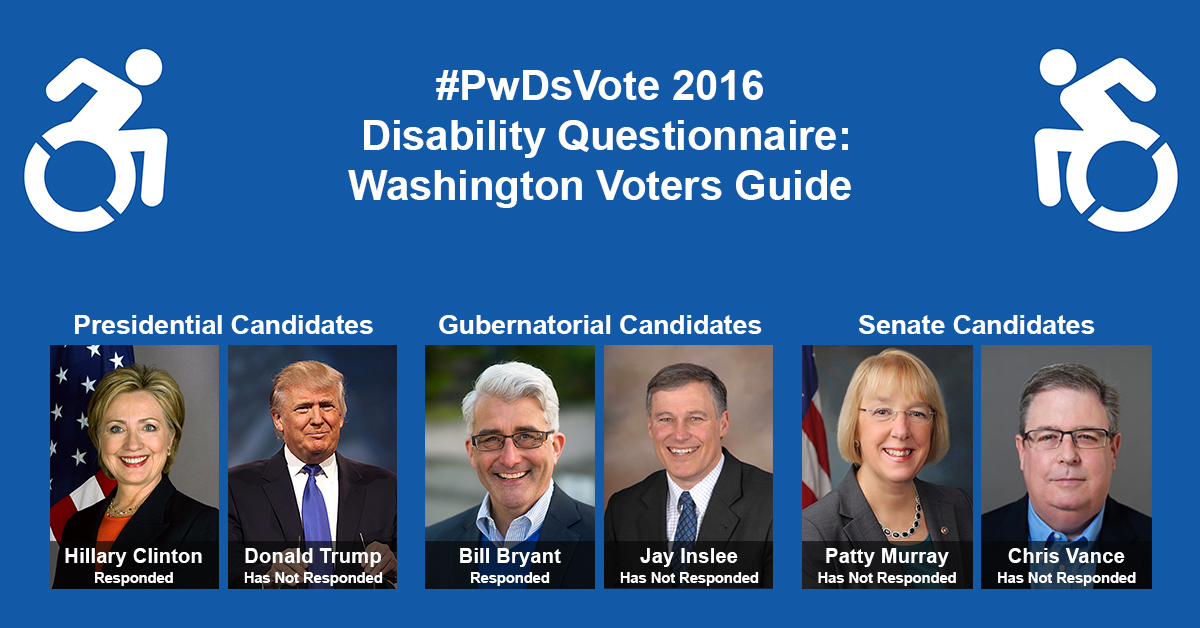 Washington, Oct. 18 – As voters get ready to head to the polls in Washington, RespectAbility has released its Washington Disability Voter Guide for the upcoming senate, gubernatorial, and presidential races. Republican Bill Bryant is challenging incumbent Democrat Gov. Jay Inslee while Republican Chris Vance is challenging incumbent Sen. Patty Murray for the Senate seat. Bryant, as well as presidential candidate Hillary Clinton, has completed the #PwDsVote Disability Campaign Questionnaire for people with disabilities. Inslee, Murray and Vance have not completed the questionnaire.

The presidential questionnaire was created during the primary season and asked all of the presidential candidates to comment on 16 disability questions. Former Secretary of State Hillary Clinton responded by addressing all of the questions. Despite numerous requests in person and by phone and email, the Trump campaign has not yet filled out the RespectAbility questionnaire. The American Association of People with Disabilities and the National Council on Independent Living also has a nonpartisan presidential questionnaire, which both Clinton and Trump have completed. Libertarian Gary Johnson and Green Party candidate Jill Stein have not filled out either questionnaire.

Washington’s 907,417 citizens with disabilities now have a chance to read Bryant’s responses and understand where he lies on certain issues. RespectAbility is still awaiting responses from Jay Inslee, Chris Vance, and Patty Murray and will publish them verbatim if and when they are received.

In his response, Bryant talked about how early intervention helped his nephew who has autism, and inspired him to want to help people with disabilities succeed.

“Early intervention enabled him to master reading and math skills above grade level,” he responded. “His journey, and the joy and challenges experienced by his parents and our family, have given me a unique perspective into the needs of both those with disabilities and their families. It’s because of this perspective that I want to work with advocates of those with disabilities.”

RespectAbility President Jennifer Laszlo Mizrahi said, “It is vital for us to know where the candidates stand on the disability aspects of economic, stigma, education, safety, transportation, housing, healthcare, foreign affairs, criminal justice and other issues. Candidates have hugely different ideas about how to deal with the issues. Thus, it’s extremely important to read their full answers so you can understand their vast differences. We also are disappointed that Mr. Trump, Gov. Inslee, Sen. Murray and Mr. Vance have yet to complete the questionnaire and hope they will do so soon. We will send out any updates that arrive.”

RespectAbility, founded in 2013, is a nonpartisan, nonprofit organization working to end stigmas and advance opportunities for people with disabilities. It has submitted comments for all 50 state’s drafts of the Unified Plan as required under Section 102 of WIOA. Washington’s State Plan contains some of the best efforts around accessibility and the state’s One-Stop Centers. However, at the same time, it complete omits any discussion of the Project Search model of school to work transitions, omits any references to Section 503 of the Rehabilitation Act, and it neglects the need to address disability issues among ex-offenders.

One of the most important facets of WIOA is that it raises expectations for youth with disabilities and assists states to provide them with the supports they need to ensure success. Indeed, as Washington’s Baby Boomers retire and the state’s economy evolves, employers are starting to experience increasing talent shortage. Washingtonians with disabilities are an untapped resource that can be trained to bridge that gap. Indeed, a recent detailed study by the Kessler Foundation and the University of New Hampshire shows the 70 percent of working age people with disabilities are striving for work.

Evidence shows that people with disabilities can provide a wonderful solution to companies and other employers that want to succeed. The diverse skills, greater loyalty and higher retention rates of people with disabilities are already starting to meet employer talent needs in increasing numbers around America. With WIOA, Washington can benefit from that progress if it truly breaks down silos within government agencies and partners, and lets innovation, based on evidence-based practices, take place.

Remember to Vote
Washington residents can vote for the candidates of their choice either on the standard voting schedule or through mail. Washingtonians have until Oct. 31, 2016, to register to vote for the presidential general election. You must register in person at your local County of Elections Department. More information regarding voting can be found at: Elections and Voting. If you are unable to partake in standard voting, any registered Washington voter can submit their vote through the mail. Your ballot is mailed to you at least 18 days before the election. To receive your ballot, your voter registration mailing address must be current. In order for your ballot to count, it must be postmarked no later than Election Day, returned to a designated ballot drop box by 8:00 p.m. on Election Day, or returned in person to your county elections department by 8:00 p.m. on Election Day. More information on vote by mail can be found at: Vote by Mail.