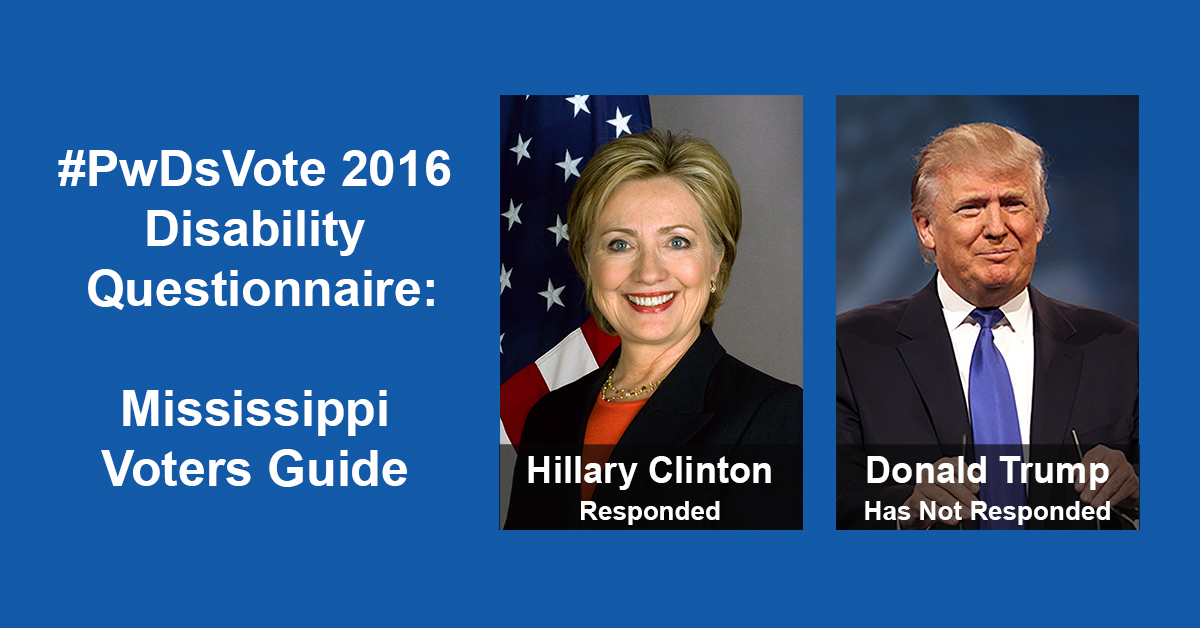 Washington, Oct. 18 – As voters get ready to head to the polls in Mississippi, RespectAbility is releasing its Mississippi Disability Voter Guide for the upcoming presidential election. Democrat Hillary Clinton has completed the #PwDsVote Disability Campaign Questionnaire, but Republican Donald Trump has yet to do so.

The presidential questionnaire was created during the primary season and asked all of the presidential candidates to comment on 16 disability questions. Former Secretary of State Hillary Clinton responded by addressing all of the questions. Despite numerous requests in person and by phone and email, the Trump campaign has not yet filled out the RespectAbility questionnaire. The American Association of People with Disabilities and the National Council on Independent Living also has a nonpartisan presidential questionnaire, which both Clinton and Trump have completed. Libertarian Gary Johnson and Green Party candidate Jill Stein have not filled out either questionnaire.

The fact that Mississippi has worked hard to be the first state to submit their WIOA State Plan to the Department of Labor is a testament to the state’s commitment to the issue of workforce development. However, Mississippi still remains segmented and there is a lack of solutions viewed through the disability lens. Solutions to the common challenges of disabilities need to be integrated throughout the state plan and not just be limited to the sections concerning Mississippi’s VR system. Lastly, there is a fundamental need to ensure that the right data points around disability and labor force participation rates are included not only in the text of the State Plan but also inform the design of Mississippi’s performance metrics.

Remember to Vote
Mississippi residents can vote for the candidates of their choice either through the standard voting schedule or through absentee ballots. Mississippi voters had until Oct. 8, 2016 to register for the general election. While Mississippi does not have Early Voting in the sense of having certain polling places open on designated days prior to Election Day, Mississippi does have Absentee Voting both by mail and in person. To vote Absentee by mail, request a ballot and submit it by 5:00 p.m. on Nov. 7, 2016. Vote in person, using an absentee ballot at the municipal clerk’s office as soon as absentee ballots are available, or submit it through the mail. For more information regarding Absentee Voting, visit: General Election UOCAVA Absentee Voting.