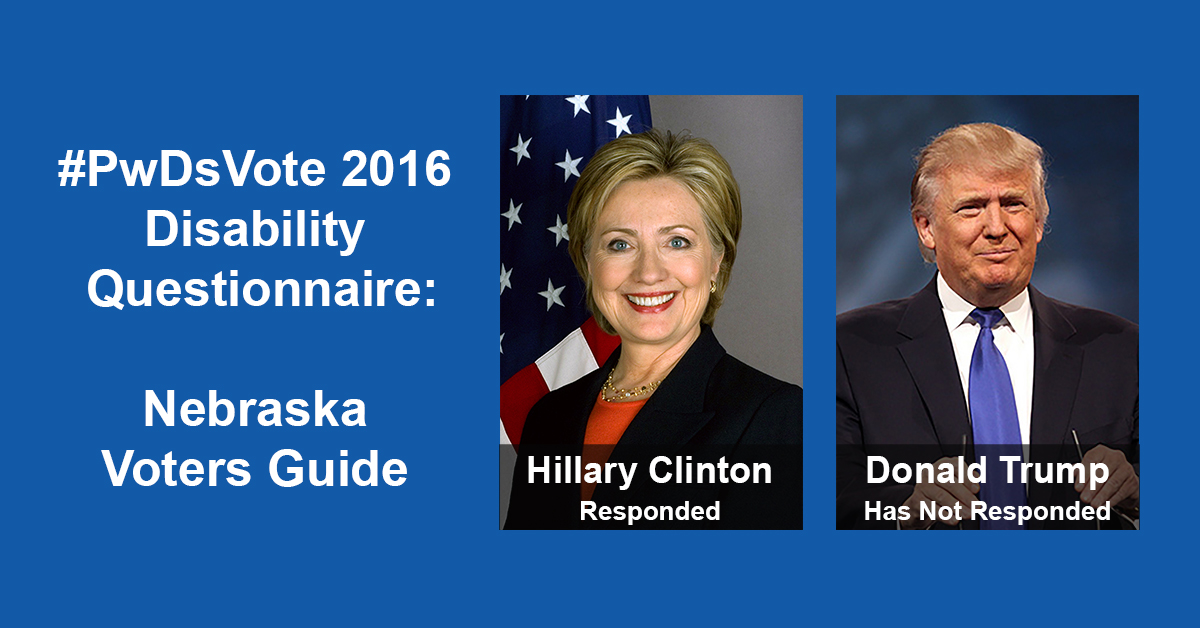 Washington, Oct. 18 – As voters get ready to head to the polls in Nebraska, RespectAbility is releasing its Nebraska Disability Voter Guide for the upcoming presidential election. Democrat Hillary Clinton has completed the #PwDsVote Disability Campaign Questionnaire, but Republican Donald Trump has yet to do so.

Nebraska has a strong foundation from which it can continue to innovate and work harder to expand its current employment rate for peoples with disabilities. The state plan includes critical data points, discusses outreach to key businesses, and points to growing sectors to set Nebraska on a path to continue expanding job opportunities for people with disabilities. However, the state could include in the plan a number of initiatives to prepare youths with disabilities for the workplace.

Remember to Vote
Nebraska residents can vote for the candidates of their choice either through the standard voting schedule or through early/absentee voting. The online registration deadline is Oct. 18, 2016. However, you may register in person at your local town office, city hall, or other approved location at any time. For more information, visit: Nebraska Online Voter Registration. For more information on registration: Voter Registration Frequently Asked Questions.

Nebraska has early/absentee voting by mail and in person. Apply for an early voting ballot by contacting your County Clerk or Election Commissioner in person at the election office, by personal agent, by mail or by fax. Any registered voter can receive an early vote ballot. All Early Voting ballots, whether personally delivered, delivered by agent, delivered by mail or other carriers must arrive by the closing of the polls on Election Day to count. More information regarding early voting can be found at: Voter Registration Frequently Asked Questions.