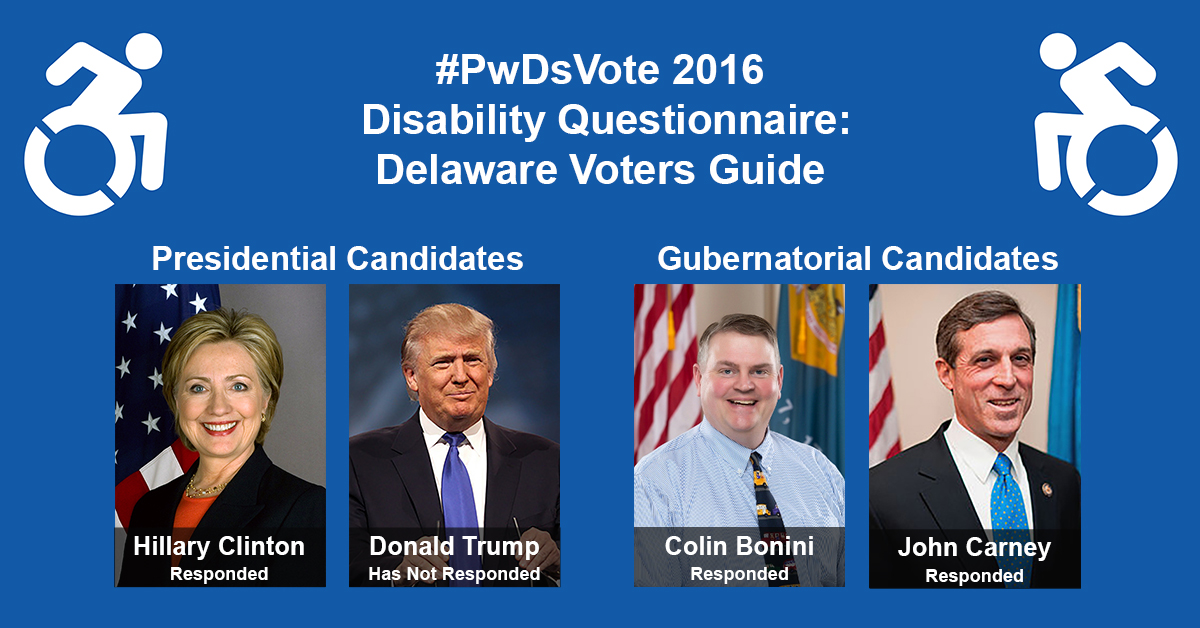 Published by Charles Butler on October 19, 2016

Washington, Oct. 19 – As voters get ready to head to the polls in Delaware, RespectAbility has released its Delaware Disability Voter Guide for the upcoming gubernatorial and presidential races. Republican state Sen. Colin Bonini and Democratic Rep. John Carney are competing to become Delaware’s next governor. Whomever wins will have big shoes to fill as current Delaware Gov. Jack Markell, who is term limited, is a hero to the disability community. Markell was awarded recognition by RespectAbility this summer for his leadership nationally in creating more job opportunities for people with disabilities.

Bonini and Carney, as well as presidential candidate Hillary Clinton, all have completed the #PwDsVote Disability Campaign Questionnaire for people with disabilities. Because of that, Delaware’s 109,763 citizens with disabilities now have a chance to compare them on a variety of key issues.

Eleven candidates for governor, as well as 26 candidates for senate, from both sides of the aisle (22 Democrats, 14 Republicans, 1 Green Party) completed the down ballot questionnaire, showing that disability rights is a nonpartisan issue. An additional nine candidates responded that they are not completing any questionnaires during this campaign season. The responses also are geographically-diverse, coming from states all around the country, as politicians are paying more and more attention to the disability community.

In his responses, Bonini said reducing and removing stigmas surrounding people with disabilities should start with employers.

Carney also responded, explaining that all businesses can benefit from hiring people with disabilities.

“These employees are often very grateful for the opportunity, eager to learn new skills, and extremely hardworking — qualities that every employer wants in those they hire,” he said. “The state of Delaware has been a national leader in hiring people with disabilities and as governor, I would expect this to continue.”

RespectAbility President Jennifer Laszlo Mizrahi said, “It is vital for us to know where the candidates stand on the disability aspects of economic, stigma, education, safety, transportation, housing, healthcare, foreign affairs, criminal justice and other issues. Candidates have hugely different ideas about how to deal with the issues. Thus, it’s extremely important to read their full answers so you can understand their vast differences. Given the outstanding work done by Markell and his team on disability issues, the newly elected governor will have good plans and practices in place that will help people with disabilities in Delaware going forward.”

Delaware Leadership Prioritizes Disability Employment
There are 55,633 Delawareans with disabilities who are between the ages of 18-64. Additionally, there are 3,800 Delawareans ages 16-20 with disabilities. More than 16,000 Delaware students have individual education plans (IEPs). However, many Delawareans with disabilities have not yet received a disability diagnosis they need, and thus are not yet receiving the school accommodations and supports that they need to succeed. Many students who might need support to succeed academically instead find themselves trapped into a lifetime of poverty or flowing down the school to prison pipeline.

RespectAbility, founded in 2013, is a nonpartisan, nonprofit organization working to end stigmas and advance opportunities for people with disabilities. It has submitted comments for all 50 state’s drafts of the Unified Plan as required under Section 102 of WIOA. Delaware’s commitment to people with disabilities is evident throughout the written state plan. The Plan as written will significantly improve Delaware’s workforce system and its ability to serve people with barriers to employment. Delaware may be a small state, but it has had a substantial positive impact nationally. Under the new WIOA plan, with strong leadership and implementation, people with disabilities will be ever-increasingly contributing members of their communities in new and better ways. This will strengthen the economy for all people in Delaware.

One of the most important facets of WIOA is that it raises expectations for youth with disabilities and assists states to provide them with the supports they need to ensure success. Indeed, as Delaware’s Baby Boomers retire and the state’s economy evolves, employers are starting to experience increasing talent shortage. Delawareans with disabilities are an untapped resource that can be trained to bridge that gap. Indeed, a recent detailed study by the Kessler Foundation and the University of New Hampshire shows the 70 percent of working age people with disabilities are striving for work.

Evidence shows that people with disabilities can provide a wonderful solution to companies and other employers that want to succeed. The diverse skills, greater loyalty and higher retention rates of people with disabilities are already starting to meet employer talent needs in increasing numbers around America. With WIOA, Delaware can benefit from that progress if it truly breaks down silos within government agencies and partners, and lets innovation, based on evidence-based practices, take place.

Remember to Vote
Delaware residents can vote for the candidates of their choice either on the standard voting schedule or through absentee ballots. Delawareans had until Oct. 15, 2016, to register to vote for the presidential general election. More information concerning voting can be found at: Voting in Delaware. If Delawareans are registered voters and are unable to vote in person on Election Day, they may be eligible to vote by absentee ballot. Voters have until Nov. 7, 2016 to vote by absentee ballot. You can vote in person or through the mail. More information regarding absentee ballots and the application can be found at: Voting by Absentee Ballot.