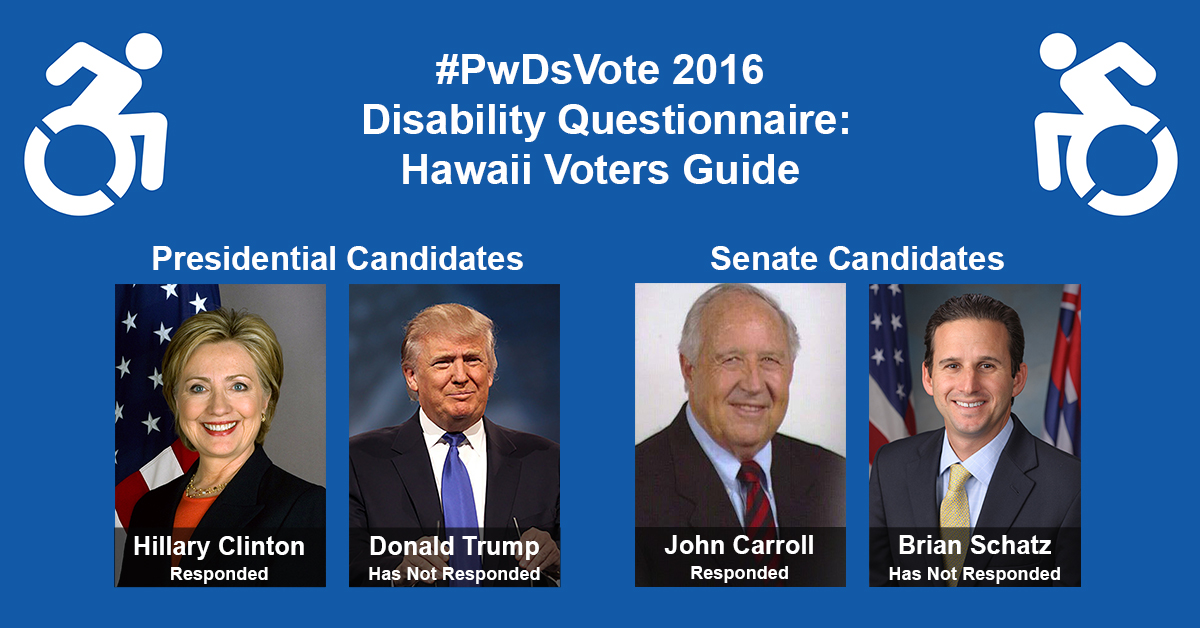 Published by Charles Butler on October 19, 2016

Washington, Oct. 19 – As voters get ready to head to the polls in Hawaii, RespectAbility has released its Hawaii Disability Voter Guide for the upcoming senate and presidential races. Republican John Carroll, who is challenging incumbent Democrat Sen. Brian Schatz, as well as presidential candidate Hillary Clinton, has completed the #PwDsVote Disability Campaign Questionnaire for people with disabilities. Hawaii’s 159,475 citizens with disabilities now have a chance to read Carroll’s responses and understand where he lies on certain issues. RespectAbility is still awaiting responses from Brian Schatz and will publish them verbatim if and when they are received.

Twenty-six candidates for Senate, as well as 11 candidates for governor, from both sides of the aisle (22 Democrats, 14 Republicans, 1 Green Party) completed the down ballot questionnaire, showing that disability rights is a nonpartisan issue. An additional nine candidates responded that they are not completing any questionnaires during this campaign season. The responses also are geographically-diverse, coming from states all around the country, as politicians are paying more and more attention to the disability community.

In his response, Carrol, who is hard of hearing himself, mentioned that despite not having experience working with people with disabilities, he is adamant about improving their lives.

“I do not have a proven record of doing so,” he stated. “However, I see people with disabilities in the same light that I see my other constituents. I will hear their needs and address them as they arise. We all deserve the same opportunities.”

RespectAbility President Jennifer Laszlo Mizrahi said, “It is vital for us to know where the candidates stand on the disability aspects of economic, stigma, education, safety, transportation, housing, healthcare, foreign affairs, criminal justice and other issues. Candidates have hugely different ideas about how to deal with the issues. Thus, it’s extremely important to read their full answers so you can understand their vast differences. We also are disappointed that Mr. Trump and Sen. Schatz have yet to complete the questionnaire and hope they will do so soon. We will send out any updates that arrive.”

Hawaii Looks to Expand Disability Employment
There are 69,846 Hawaiians with disabilities who are between the ages of 18-64. Additionally, there are 2,800 Hawaiians ages 16-20 with disabilities. More than 17,000 Hawaii students have individual education plans (IEPs). However, many Hawaiians with disabilities have not yet received a disability diagnosis they need, and thus are not yet receiving the school accommodations and supports that they need to succeed. Many students who might need support to succeed academically instead find themselves trapped into a lifetime of poverty or flowing down the school to prison pipeline.

RespectAbility, founded in 2013, is a nonpartisan, nonprofit organization working to end stigmas and advance opportunities for people with disabilities. It has submitted comments for all 50 state’s drafts of the Unified Plan as required under Section 102 of WIOA. Hawaii’s commitment to people with disabilities is evident throughout the written state plan. Because of WIOA, Hawaii has the chance to institutionalize and expand on the many best practices you have already propelled in gaining top ten status in terms of employment outcomes for people with disabilities. From the language of the Unified State Plan, there is a lot of innovative and dedicated work being done on workforce development in Hawaii, especially with the use of Business Leadership Networks and youth employment.

One of the most important facets of WIOA is that it raises expectations for youth with disabilities and assists states to provide them with the supports they need to ensure success. Indeed, as Hawaii’s Baby Boomers retire and the state’s economy evolves, employers are starting to experience increasing talent shortage. Hawaiians with disabilities are an untapped resource that can be trained to bridge that gap. Indeed, a recent detailed study by the Kessler Foundation and the University of New Hampshire shows the 70 percent of working age people with disabilities are striving for work.

Evidence shows that people with disabilities can provide a wonderful solution to companies and other employers that want to succeed. The diverse skills, greater loyalty and higher retention rates of people with disabilities are already starting to meet employer talent needs in increasing numbers around America. With WIOA, Hawaii can benefit from that progress if it truly breaks down silos within government agencies and partners, and lets innovation, based on evidence-based practices, take place.

Remember to Vote
Hawaii residents can vote for the candidates of their choice on the standard voting schedule, early voting, or through mail ballots. Hawaiians had until Oct. 10, 2016 to register to vote for the election. More information regarding voting and registration can be found at: Registration. Any registered Hawaiian voter can cast their vote through an early vote or absentee ballots. Early voting is available from Oct. 25 through Nov. 5. Any registered voter also can apply for a vote by mail ballot. Fill out an application for a mail ballot and send it to your local clerk’s office. In order for an absentee ballot to be processed, it must arrive to clerk’s office by Nov. 1. More information regarding early voting and absentee ballots can be found at: Early Voting / Vote by Mail.