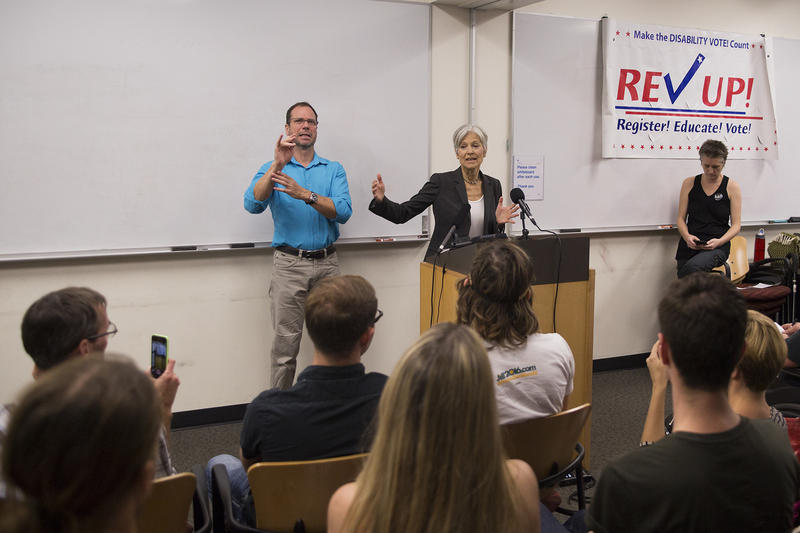 Published by Lauren Appelbaum on October 20, 2016

Washington, Oct. 20 – Until recently, when searching for where Green Party candidate Jill Stein stood on key disability issues, there are a number of pieces about her supposed views about vaccines and their link to autism, but little else was found. Multiple disability organizations have asked Stein to complete two different nonpartisan presidential questionnaires, but she has not yet done so. Hillary Clinton has completed both the #PwDsVote and REVUP questionnaires, while Donald Trump has completed the REVUP questionnaire.

However, earlier this week, Stein met with a group of Texans with disabilities and took their questions. Per a report by KUT, Austin’s NPR station, she talked about healthcare, caregivers, housing and access to voting.

“And in the same way that we are diverse culturally, we are also diverse in terms of our abilities,” Stein told the group at a public library in downtown Austin. “And, in recognizing and respecting our differences as part of what enriches us, each person, in their own way, is contributing to us.”

The event was organized by disability groups including Disability Rights Texas and ADAPT Texas, who ensured that an ASL interpreter was present.

Green Party presidential candidate Jill Stein made stops in Austin yesterday. Before an event at Huston-Tillotson University Monday evening, Stein met with a small crowd at a public library downtown. The event was specifically geared toward Texans who are disabled.

“And in the same way that we are diverse culturally we are also diverse in terms of our abilities,” Stein told the group. “And, in recognizing and respecting our differences as part of what enriches us, each person in their own way is contributing to us.”

Stein also took questions. She was asked about Medicaid payments for people who help the physically disabled do things like get out of bed and go outside.

A couple of folks said the state is paying these health care workers too little – so help is harder to come by. Stein was also asked about the rise in housing prices in Austin.

“We are really at the breaking point right now as a society and the disabled community is kind of the chief victim here as sort of the most vulnerable,” she said.

This wasn’t strictly an event aimed at getting people to know about Stein’s thoughts on disability rights, though.

It was also about getting out the disabled vote – as well as organizing it.

Jeff Miller with Disability Rights Texas says he’s working with groups all around the state.

David Wittie with ADAPT Texas told the group this is a tough task because so many disabled folks are institutionalized in Texas.

“That means they are locked up in a nursing homes or some state school, or some other state supported living center that doesn’t really encourage opportunities to become civic-minded citizens and participate in voting,” he says.

Last month Wittie’s group held a registration drive for people who are blind. It’s part of the same effort to make sure people who are disabled aren’t staying home this November.