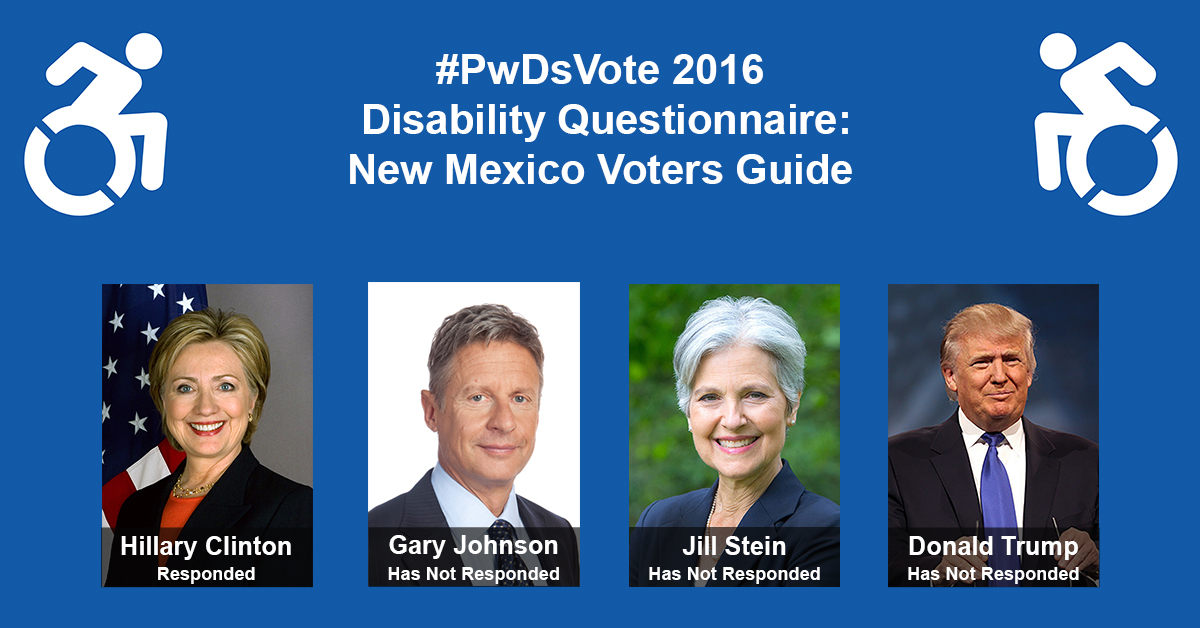 Published by Nathan Shearer on October 21, 2016

Washington, Oct. 21 – As voters get ready to head to the polls in New Mexico, RespectAbility is releasing its New Mexico Disability Voter Guide for the upcoming presidential election. Democrat Hillary Clinton is the only presidential candidate to have completed the #PwDsVote Disability Campaign Questionnaire.

The presidential questionnaire was created during the primary season and asked all of the presidential candidates to comment on 16 disability questions. Former Secretary of State Hillary Clinton responded by addressing all of the questions. Despite numerous requests in person and by phone and email, the Trump campaign has not yet filled out the questionnaire. The American Association of People with Disabilities and the National Council on Independent Living also has a nonpartisan presidential questionnaire, which both Clinton and Trump have completed. Libertarian Gary Johnson, who served as governor of New Mexico from 1995-2003 as a member of the Republican party, and Green Party candidate Jill Stein have not filled out either questionnaire but Stein recently did speak about disability issues during a campaign stop in Texas.

New Mexico Needs to Improve Outcomes for Citizens with Disabilities
There are 311,773 people with a disability living in New Mexico, of whom 157,900 are of working age (between the ages of 21 and 64). There are an additional 9,900 people ages 16-20 with disabilities, many of whom are hoping to enter the workforce. New Mexico’s voters are looking to know where the candidates stand on important disability issues in order to increase opportunities for competitive, integrated employment for people with disabilities.

New Mexico ranks fortieth in terms of its percentage of employed people of disabilities (30.4 percent), compared with 71.2 percent of people without disabilities. View the rankings of all 50 states and compare.

RespectAbility, founded in 2013, is a nonpartisan, nonprofit organization working to end stigmas and advance opportunities for people with disabilities. It has submitted comments for all 50 state’s drafts of the Unified Plan, which is required under Section 102 of the Workforce Innovation and Opportunity Act (WIOA). RespectAbility expects outcomes to improve for people with disabilities following the implementation of WIOA, and New Mexico’s draft offers many encouraging propositions that would further the goals of people with disabilities who wish to achieve the American Dream. With an engaged governor, a workforce system engaging job seekers with employment barriers, and partnership programs focused on capacity building and employer engagement, the pieces are in place for New Mexico to rapidly achieve improved outcomes.

The combined state plan explores the issue of apprenticeships and commits resources to building on these programs as a career pathway. The plan goes into great detail to describe the 38 registered apprenticeship programs in New Mexico and the approximately 1,300 apprentices being served by them. These are critical steps and are steps that need to be fully accessible to people with disabilities in New Mexico, as they can serve as a critical step for getting people with disabilities into the workforce.

Remember to Vote
New Mexico residents can vote for the candidates of their choice either through the standard voting schedule or through early voting. The deadline to register to vote in New Mexico was Oct. 11, 2016. Early voting in New Mexico began Oct. 11 and ends Nov. 4, and is done at your county clerk’s office. To find your county clerk’s office and for more information, visit: County Clerk Information.

New Mexico also permits you to vote absentee. You may do so by mail, or in person at your county clerk’s office. The County Clerk must receive your signed Absentee Ballot Application by no later than 5:00 p.m. on Friday, Nov. 4. Return the ballot to the County Clerk’s office by 7:00 p.m. on Election Day (Nov. 8). For more information, visit New Mexico’s election website.