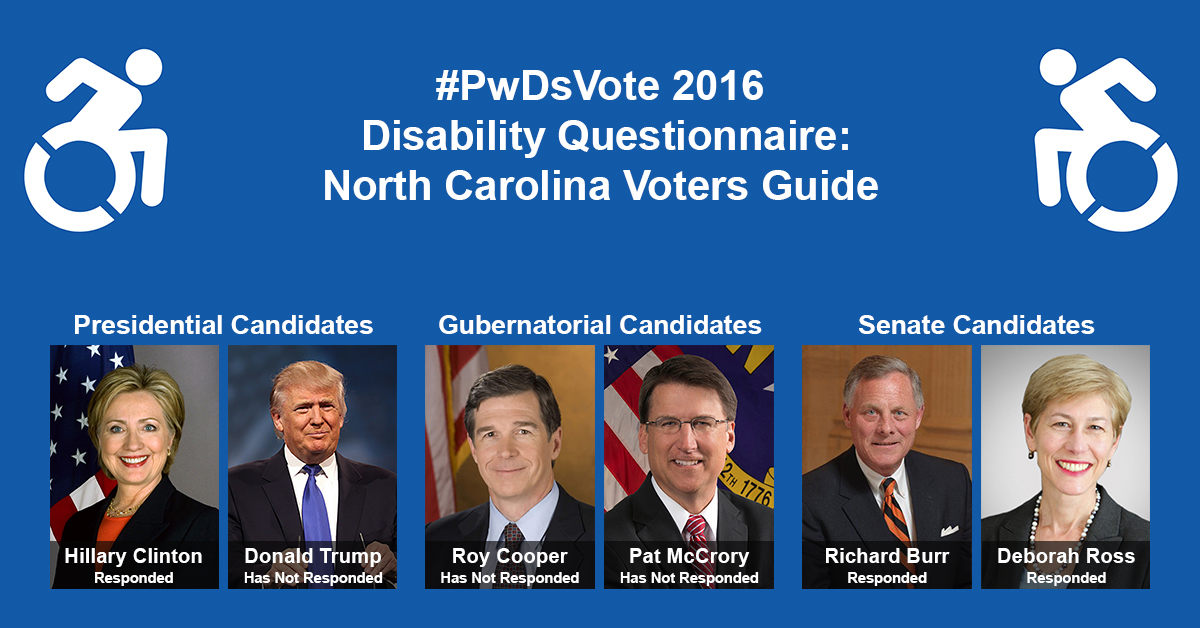 Published by Charles Butler on October 21, 2016

Washington, Oct. 21 – As voters get ready to head to the polls in North Carolina, RespectAbility has released its North Carolina Disability Voter guide for the upcoming senate, gubernatorial and presidential races.

North Carolina’s 1,330,804 citizens with disabilities now have a chance to compare several candidates on a variety of key issues.

Twenty-six candidates for senate, as well as 11 candidates for governor, from both sides of the aisle (22 Democrats, 14 Republicans, 1 Green Party) completed the down ballot questionnaire, showing that disability rights is a nonpartisan issue. An additional nine candidates responded that they are not completing any questionnaires during this campaign season. The responses also are geographically-diverse, coming from states all around the country, as politicians are paying more and more attention to the disability community.

In her response, Ross addressed the need to prevent discrimination against individuals with disabilities, such as her involvement in passing legislation to prevent bullying

“No one should be discriminated against or stigmatized by differentiating characteristics including disabilities of any kind,” she said. “In the State House, I voted for legislation that required schools to adopt policies prohibiting bullying and harassment behaviors motivated by actual or perceived differentiating characteristics including disabilities. As your next U.S. Senator, I will continue this commitment to make sure that people with disabilities experience no barriers in employment, independence, and equality.”

Burr also talked about the different legislation he has been involved with that advances opportunities for people with disabilities.

“As a senior member of the Committee on Health, Education, Labor, and Pensions, I worked closely with my colleagues to pass the Workforce Innovation and Opportunity Act of 2014,” he responded in the questionnaire. “This means people with disabilities will have a greater opportunity to achieve self-sufficiency and competitive integrated employment, which will ultimately enhance their life opportunities. For this, I was pleased to support WIOA.”

Coleman talked about the importance of providing economic opportunities for people with disabilities.

“Providing resources to successfully implement the Workforce Innovation and Opportunity Act as well as cultivating partnerships to create programs that connect people with disabilities to jobs, internships, and apprenticeships is pivotal,” she said. “We need to expand affirmative action and anti­-discrimination protections for all minorities, which will directly benefit people with disabilities –the largest minority in the country. As Lt Gov., I would sit on the State Board for the NC Community College System, where I’d advance career training programs in our community colleges and expand access for people with disabilities.”

In his response, Davis took a comprehensive approach to ensuring that people with disabilities can not only gain employment but also improve their lives.

“It is important to give every American a chance to live a fulfilled life,” he said. “More money needs to go toward accessible public transportation so that Americans with disabilities can get to the resources they need to live a successful and healthy life. Early testing for disabilities must be in place so that children can get access to resources earlier to give them even more of a head start. More businesses need to be trained and educated on people with disabilities so that the stigma behind being a working person with disability can be taken away. The American Dream must be accessible to all Americans, not just the few.”

RespectAbility President Jennifer Laszlo Mizrahi said, “It is vital for us to know where the candidates stand on the disability aspects of economic, stigma, education, safety, transportation, housing, healthcare, foreign affairs, criminal justice and other issues. Candidates have hugely different ideas about how to deal with the issues. Thus, it’s extremely important to read their full answers so you can understand their vast differences. We also are disappointed that Mr. Trump, Atty. Gen. Cooper and Gov. McCrory have not yet responded. have yet to complete the questionnaire and hope they will do so soon. We will send out any updates that arrive.”

RespectAbility, founded in 2013, is a nonpartisan, nonprofit organization working to end stigmas and advance opportunities for people with disabilities. It has submitted comments for all 50 state’s drafts of the Unified Plan as required under Section 102 of the Workforce Innovation and Opportunity Act (WIOA). North Carolina needs to improve outcomes of its written state plan. As the labor force in North Carolina is starting to experience talent shortages, North Carolinians with disabilities can offer valued and needed talent that can help grow North Carolina’s overall economy. Many of the critical issues in North Carolina concern the need for a disability lens on the overall work of the workforce system and the need to better align programs

One of the most important facets of WIOA is that it raises expectations for youth with disabilities and assists states to provide them with the supports they need to ensure success. Young North Carolinians with disabilities are an untapped resource that can be trained to bridge that gap. Indeed, a recent detailed study by the Kessler Foundation and the University of New Hampshire shows the 70 percent of working age people with disabilities are striving for work.

Evidence shows that people with disabilities can provide a wonderful solution to companies and other employers that want to succeed. The diverse skills, greater loyalty and higher retention rates of people with disabilities are already starting to meet employer talent needs in increasing numbers around America. With WIOA, North Carolina can benefit from that progress if it truly breaks down silos within government agencies and partners, and lets innovation, based on evidence-based practices, take place.

Remember to Vote
North Carolina residents can vote for the candidates of their choice either on the standard voting schedule or through early voting. North Carolinians had until Oct. 14, 2016, to register to vote for the presidential general election. Voters also can cast an early vote from Oct. 20, 2016 through Nov. 5, 2016. Any registered North Carolina voter can submit a vote through absentee ballots as well. To receive a mail-in absentee ballot for an election, a voter or the voter’s near relative or legal guardian must use the State Absentee Ballot Request form to request the ballot. Request forms are available at the State Board of Elections’ office, on the State Board of Elections website, and at county boards of elections’ offices. The absentee ballot must be filled out in the presence of witnesses. More information and rules regarding absentee voting can be viewed at Absentee Voting by Mail.