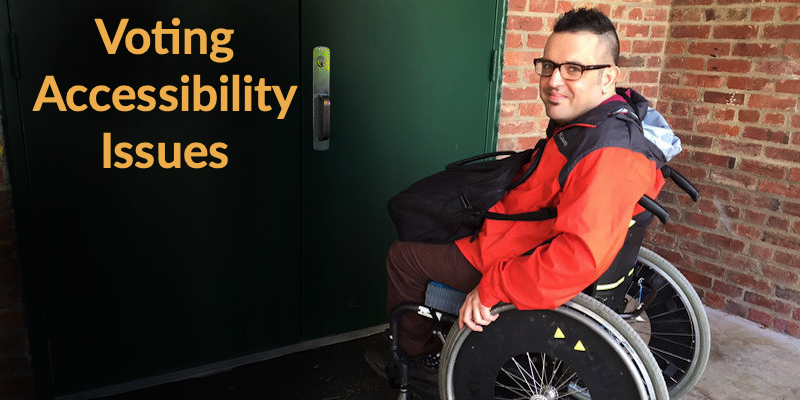 Washington, D.C., Nov. 20 – Voters from across the country faced long lines, malfunctioning machines and a lack of trained workers on during the 2018 midterm elections. In some parts of the country, voters were forced to wait for hours, only to find that their voting precinct was not equipped with the correct facilities to handle a large turnout. To voters without disabilities, these obstacles may come across as a hindrance or annoyance. For voters with disabilities, however, lack of accessible technology, long wait times and voting rules can disenfranchise them from the system.

The problems with the election were widespread across the country. In Atlanta, home to a contentious Georgia Governor’s race, one precinct was equipped with only three electronic machines to serve nearly 3,000 voters. In Brooklyn, voters were forced to wait while poll workers rushed to repair ballot scanners as a line slowly wrapped around the precinct outside. In North Dakota, Native American voters found themselves being turned away from trying to cast provisional ballots. It became clear that across the country even voters without disabilities faced obstacles in trying to vote.

The struggle to vote was acute for John Jay Halpern, a retired radiologist in Broward County, Florida. Halpern is a quadriplegic and unable to sign his own name, which is a requirement for ballots to be cast where he lives. Halpern checked several times to ensure his ballot was received by the election board. He was not notified when his ballot was rejected due to errors with the signature match. When a volunteer with the Democratic party came to his house, she told him that his vote had not been counted and he was disenfranchised. Halpern was unable to drive to the election board to solve the issue. Instead his wife, Wendy, traveled to the election board only to be told that Halpern’s ballot had never been received.

“It just— It made me feel like there’s a separate standard; because I was disabled, I somehow had to jump through more hoops than someone who’s able-bodied would have to do, and I really resented that,” Halpern told Buzzfeed. Even after the situation was finally remedied, Halpern expressed his frustration with the process. “Just the whole concept of having matching signatures, independent of my disability, began to seem like ludicrous criteria to me. I was pretty upset about the whole process.”

The Washington, D.C., metro area saw its own set of voting issues. In Prince George’s County, two precincts ran out of ballots and forced voters to wait until after 10:00 p.m. Voters reported waiting in line for nearly four hours at both Upper Marlboro Community Center and Brandywine Elementary.

Voters with disabilities often faced difficulty obtaining the technology or assistance they needed to vote in local precincts such as Rockledge Elementary School in Bowie, Maryland. The precinct was equipped with only one accessible voting device for a population of 1,700 voters. Many voters in the precinct’s neighborhood are retired with health issues, and often need options such as an electronic Ballot Marking Device (BMD), a voter assistant or places to sit while they vote.

The line for the BMD extended well past seven people at one point during the day, with several voters waiting nearly an hour to choose their candidates. Many opted to drop out of line and use a paper ballot instead of waiting a significant amount of time for an accessible way to vote. One voter pulled aside a local election judge to ask, “why is there only one machine?” The poll worker responded that the Prince George’s county election board had only delegated one machine for the precinct’s use.

Other issues arose throughout the day. Seating options for voters who had various health issues often were unavailable. Poll workers had to be reminded several times throughout the day to ask if voters needed an accessible way to mark their ballot as required by law. During the middle of the day, ballot judges realized that they had not been given enough accessible ballots from the county board of elections and called to request more. The accessible ballots arrived hours later.

Voters often had to forgo accessible options in favor of time or availability. Voters should not be forced to abandon the chance to use accessible voting options to retain their right to cast a ballot.

The Absence of the Help America Vote Act (HAVA)

Accessibility in voting places should be enforced through the Help America Vote Act of 2002. Enacted shortly after the voting crisis during the 2000 election, HAVA is designed to ensure that states meet voting standards of the 21stcentury. However, HAVA is loosely enforced. States and local election boards often do not meet the standards outlined within the act. In fact, a study by the Government Accountability Office inspected 137 polling places on Election Day in 2016 and found that roughly two-thirds of them had at least one error in accessibility.

Sherrilyn Ifill is the president and director-counsel of NAACP Legal Defense & Educational Fund. She spoke about disability voting rights during a Civil Rights conference hosted by The Leadership Conference on Civil and Human Rights on Friday, Nov. 16.

“We have failed to uphold the letter and spirit of HAVA,” said Ifill. She stressed that while discussing voting rights, the topic of disability is often not brought up. “It is certainly something that needs to be discussed but isn’t.”

The disability community is one of the most at-risk groups for being disenfranchised from the voting system. With loosely enforced protections and increased voter suppression tactics, more needs to be done to protect disability voting rights.

Between lack of accessible technology, long wait times and voting rules that serve to disenfranchise voters, people with disabilities often cannot cast their ballots. This year’s midterm elections showed that this is a nationwide issue. The protections that exist to serve voters with disabilities often are not enforced or absent entirely. Disability status should never interfere with a person’s right to vote.