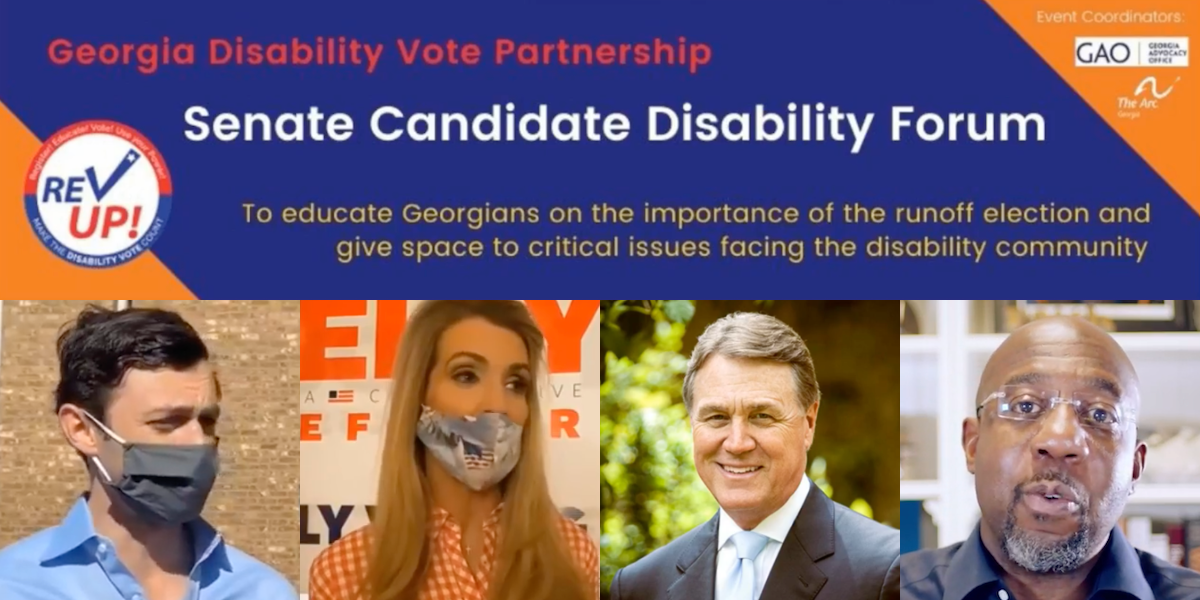 Washington, D.C., Dec. 29 – Control of the U.S. Senate depends on two runoff elections in the state of Georgia. While a lot of money is being spent by the candidates and other organizations to get out the vote, Georgia’s disability community has not been getting enough attention in these races. That started to change on Monday evening when the Georgia Disability Vote Partnership hosted a live streamed voting forum featuring all four of Georgia’s Senate runoff candidates. The forum showed answers from all candidates to the same questions: 1) Why is it so important for the disability community to be involved in the political process? 2) How do you plan to engage the disability community to be more involved and active in the laws, decisions and policies that affect our lives?

“We have to make voting accessible for all people and we need to strengthen the Americans with Disabilities Act so that Americans who are differently abled can have access to all public facilities, and are not discriminated against in our society,” Jon Ossoff (D-GA) told Sign1News, a global digital news network for deaf and hard-of-hearing viewers, while on the campaign trail.

“One of the basic and important things that candidates for office and elected officials need to do is ensure that when we are communicating, for example, that we are adding closed captions or we are adding signing support so that those who cannot hear us can still understand and what I will do in office is ensure that my Senate office is reaching out to people who have different needs and different abilities, so that everybody can participate in our democracy,” he added, before saying thank you in ASL.

Sen. David Perdue (R-GA) Spokeswoman Elizabeth Gregory said in a written statement: “Every eligible voter should have their first votes heard in this election because the future of this country is at stake. Senator Perdue has a proven record of listening to and working on issues important to the disability community. His wife Bonnie was a special needs teacher, so both the Senator and his wife are very passionate about issues impacting those with disabilities. One of Senator Perdue’s highlights in his first term was helping pass and fund the VA MISSION Act, which gives disabled veterans more options as they seek access to care outside of specific VA facilities.”

Sen. Kelly Loeffler (R-GA) answered the questions via an interview with Sign1News on the campaign trail: “It is incredibly important, because the future of the country is on the line. Is the direction of the country, we can go down the path of socialism, big government, high taxes, government-run healthcare, or fighting for the American ideals that lets all Americans live the American dream? I’m a member of the Health Education Labor and Pension Committee in the Senate so healthcare is incredibly important, but I’m also a businessperson. And I’m someone who believes in creating jobs for all Americans and we need to make sure that we have opportunities to lift all Georgians up. I’m fighting for more pandemic relief as well. We know that so many small businesses and employees have been hit hard by the pandemic, and I’m working to continue to try to deliver the relief that the Democrats have been blocking.”

Reverend Raphael Warnock (D-GA) submitted a video response, stressing, “You cannot represent me if you’re not talking to me!” His full response included: “I agree with the slogan, you cannot represent people without being in conversation with the people. And so, this sentiment “Nothing About Us Without Us” is something that I’ve tried to embody in both our campaign’s platform and messaging, but also in the campaign itself. I have long been an advocate for people who struggle with disabilities. It is something that I have addressed in our campaign as someone who has advocated for healthcare for years. That includes people with disabilities. We have 1.8 million Georgians with preexisting conditions in our state. And so I’ve tried to make sure that our platform is a platform that includes people, but not just the platform in the way that we run the campaign itself. We include closed caption hearing in our campaign collateral materials. At our major rallies we have people who sign, so that everybody can be included in the conversation. You can’t represent me if you aren’t talking to me, if you’re not engaging me. And so, this is the work that we’ve tried to do as a campaign, and it is that commitment that I would bring to the United States Senate. I see the passage of the Americans with Disabilities Act as one of the turning points in American history. We have said in this country that we’re trying to build a more perfect union. And I think if you look at this country’s history, the only way for us to understand what that really represents is for everybody to actually be on the bus. And it is these inflection points that have helped us see what inclusion actually looks like. And so, if it’s Black people standing up along with abolitionists during the Civil War and during Reconstruction to win for them certain rights, which then had to be solidified during the Civil Rights Movement. It’s women standing up during the Suffrage Movement of the 1920s. It is the Disability community standing up and saying we too deserve our share in the American promise, and here are the ways we don’t have access to it. And so, this is the great American conversation. And I see the Disability community as essential to helping us as a country, to know what’s it’s like, what it means to be a more perfect union that embraces all of our people. That’s the work I am committed to doing as a U.S. Senator.”

The forum also showcased voters with disabilities, the art and activism of artist Derek Heard, information from Maria Town, CEO of AAPD and Stacey Ramirez, state director of The Arc of Georgia. It was moderated by Georgia Advocacy Office’s Parker Glick.

Prior to this forum, there had been little outreach to voters with disabilities from all four Senate candidates in the runoff race. As noted by RespectAbility in November, none of the four candidates even mention the word disability on their campaign websites. None of the Senate candidates’ websites are fully accessible to the 254,972 Georgians who are blind or low vision. And very few of the candidates’ videos have captions, making them inaccessible to the 328,000 Deaf and Hard of Hearing Georgians.

“Honestly we didn’t know if we could pull this off,” said event co-chair and State Director – The Arc Georgia, Stacey Ramirez. “But Georgians with disabilities made this forum happen.”

The Georgia Disability Vote Partnership is a work group of REV UP Georgia. It has coordinated the efforts of disability advocacy organizations to get out the disability vote since the announcement of the runoff elections. The Arc Georgia, Georgia Advocacy Office and other grassroot advocates have mobilized many of the 27.7% of Georgians with disabilities to register to vote, stay informed during this extended election cycle and have their vote counted.

The Georgia Disability Vote Partnership has been reaching out to the campaigns on five issues and is still waiting on full responses from the campaigns. Candidates are encouraged to answer all of the questions below, and full answers will be shared broadly with Georgia voters.