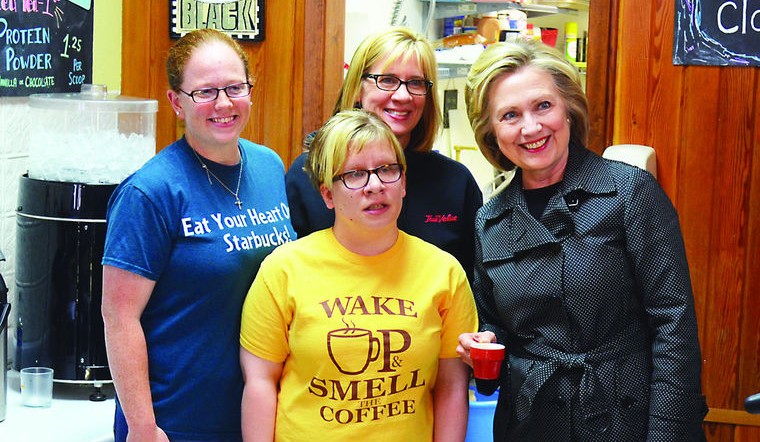 Published by Lauren Appelbaum on August 24, 2015

Washington, August 24 – Em’s Coffee Company in Independence, Iowa may appear to have been just a stop for lunch – or on a tour of small businesses – for presidential hopeful Hillary Clinton, but for the disability community, this visit last May means much more.

Em’s is run by Emilea Hillman, 26, with help from her mother Tami Fenner. Hillman has a congential condition causing a lack of nerve tissue connecting the left and right side of the brain.

Because of her intellectual disability, Hillman did not have an easy path to managing her own business. After graduating high school in 2007, Hillman worked in a sheltered workshop earning less than the minimum wage – just $2.50 an hour. Hanging clothes in a backroom, she found this task boring and tedious.

After quiting her job in 2009 in search of earning a living and experiencing more out of life, her family helped her open Em’s Coffee Company. Hillman learned the necessary skills to start her business with the help of Iowa Vocational Rehabilitation Services’ Self-Employment Program.

The coffee shop, which serves as a community gathering place for the citizens of Independence, now employs six other workers, two of whom have disabilities.

So when Clinton was nearby, Em’s was a must-stop.

“Senator Harkin told me if I was near Independence, I should come here and meet Em,” said Clinton.

“We should acknowledge how the disabilities community has played such an important role in changing things for the better in our country,” Clinton recently said in Ames, Iowa while marking the 25th anniversary of the Americans with Disabilities Act.

Fufilling employment with real wages for people with disabilities is a nonpartisan issue and it’s necessary for all the presidential candidates to talk about this important topic affecting 56 million Americans, more than 20 million of whom are working age. More than 50 percent of Americans report having a family member or close friend with a disability.