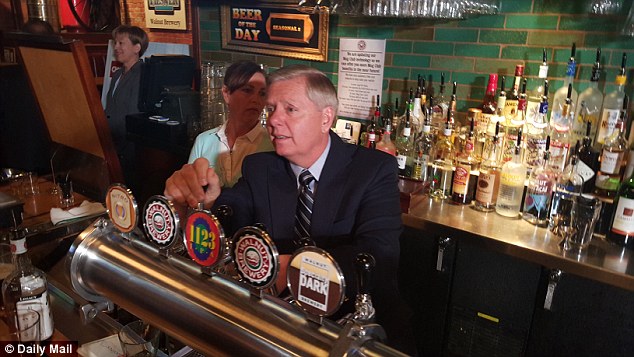 Graham: Count Me In For Medical Marijuana

Published by Lauren Appelbaum on October 28, 2015

Washington, Oct. 28 – One topic sure to come up during tonight’s CNBC debate is marijuana legalization. Colorado, the location of the debate, has legalized marijuana. Many of the Republican candidates already have come on the record if they support this or not – often supporting because they support states’ rights to make the decision – or opposing because of the belief that federal law should dictate this.

The night before the debate, Sen. Lindsay Graham played bartender and conducted an interview as the inaugural guest at CNN’s “Politics on Tap” happy hour at the Walnut Brewery in Boulder, the location of tonight’s debate.

When CNN’s Dana Bash asked Graham about marijuana legalization, the presidential hopeful said he does not support legalizing it and called marijuana a gateway drug.

However, he said, “count me in for medical marijuana” for people with epilepsy and said he supported a federal law allowing it.

“I’ve been convinced that it helps people with epilepsy,” Graham said when asked by BuzzFeed News about medical marijuana after the Q&A had wrapped up.

Maria La France of Iowans for Medical Cannabis warns against not viewing the legalization of marijuana for medical use vs recreational use as very different uses.

“There is a clear distinction between medicinal use of cannabis and recreational marijuana, and a great disservice is done when the two issues are confused,” La France said. “Presidential candidates need to realize that we are talking about medicinal use. If a voter asks about access to medical cannabis and a candidate talks about recreational use, they are doing a disservice to suffering Americans with multiple sclerosis, cancer, autism, epilepsy and others.”