O’Malley On “Dignity of Work” for People with Disabilities 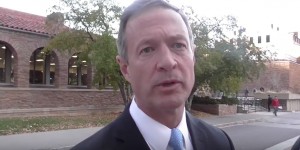 Boulder, Oct. 28 – While the night’s spotlight was shining on the CNBC Republican Primary Debate, Democratic presidential hopeful Martin O’Malley walked along the paths of the University of Colorado at Boulder campus. In a conversation with The RespectAbility Report, the former governor of Maryland said, “people with disabilities labor under a disproportionally high unemployment rate.”

These comments reflect the economic challenge and harsh reality facing our nation’s 21 million working-age people with disabilities. 321,409 Marylanders between the ages of 18 and 64 have a disability. Of that number, just four out of 10 are currently employed.

When asked about his vision for people with disabilities, O’Malley focused on employment and the work being done through Maryland’s Division of Rehabilitation Services (DORS).

“There’s dignity in every life but there’s also dignity in work,” he said. “We were actually doing things that work and helping people with training and people with placement.”