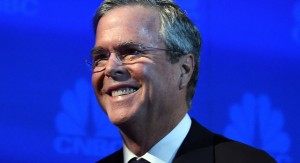 When asked about his challenging race, Bush emphasized his belief that “the great majority of…Americans believe in a hopeful future.” He then focused on the continuing challenges facing millions of people working only part-time and living in poverty.

“They’re concerned that Washington is so dysfunctional it is holding them back,” Bush said. “There are lids on people’s aspirations. Think about it: six and a half million people working part-time. Workforce participation rates lower than they were in 1977.”

This claim reflects data recently released by the Bureau of Labor Statistics which showed that just 62.4 percent of the U.S. population either had a job or was looking for work. The last time the labor force participation was as low as 62.4 percent was in October 1977. As attention grabbing as this data point is, the workforce participation rate for people with disabilities is even more startling.

Only 34.2 percent of the nation’s 21 million working age people with disabilities are employed. Seven out of 10 people with disabilities do not have the chance to pursue the independence, income and friendships that jobs provide. One in five Americans has a disability, making them the largest minority group in the country – larger than Hispanics or African Americans for example.

While Bush may have talked about workforce participation rates, the issues affecting the disability community had very little attention at the debate. Introducing policies that create opportunities for employing people with disabilities is not a conservative issue or liberal issue; it is a human issue, and it affects a large portion of the electorate in the United States. As the candidates look for ways to grow the economy, they need to remember the untapped talent possessed by people with disabilities.