Published by Lauren Appelbaum on December 13, 2015 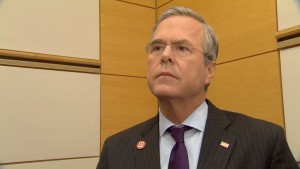 Bush is the only Republican candidate to include captions on his web-based campaign ads, citing the importance of ensuring that all have are able to access his message behind his reasoning.

Read the full transcript of Gov. Jeb Bush’s interview with The RespectAbility Report:

The RespectAbility Report: Gov. Bush, what will you do for Americans with disabilities, particularly those who are interested in employment and opportunities?

When I was Governor of the state of Florida, we created a partnership with the Chamber of Commerce around the state. We got sponsors in every city and we ended up creating a job fair in effect for people with intellectual and physical disabilities and it was extraordinarily successful.

In fact I would say Publix, the supermarket chain based in Florida, is probably one of the largest employers of people with disabilities and so it requires leadership first and foremost. People realize, when they realize it’s in their benefit, their business benefit, it’s not a charitable act, it’s actually to create a climate where customers enjoy going to their places of business, and employees like it as well. When you get that kind of attitude working, you’re going to find there to be a lot more employment opportunities.

The RespectAbility Report: How do you feel about captions on campaign commercials and other sorts of accessibility tools? You’re the only candidate in the Republican party who has captions on your ads.

The RespectAbility Report: How did you learn about disability issues?

Gov. Jeb Bush: Well, I learned it principally through a friend of mine, Berthy Aponte de la Rosa, who is an extraordinary woman who is now one of my best friends, and I met her in 1998 when I was campaigning and she became my teacher in effect. I took the time to listen and to learn a lot and she took the time to teach me.

The thing that really was a motivating factor in this was when she said that her biggest fear, her and Milton’s biggest fear, as parents were whether they were going to outlive their child. And that’s a pretty profound feeling, and a powerful emotion, and it just hit me. I just realized, you know, if you believe that life’s a gift from God and everybody has a chance to make a contribution, then we need to make sure that all that capacity is reached. And so having the ability to be a student rather than a teacher was really the catalyst for my sensitivity.

And then out of crisis came an opportunity, because the programs for the developmentally disabled were about being ready to be taken over by a federal judge. And if that doesn’t get your attention as a governor, literally the first week of office, this threat took place in a federal courtroom where I was summoned, and it gave me an opportunity to act on my core belief by getting funding and transforming the programs and working with people like Berthy. We took Florida from the very back of the pack probably to one of the models for the country.

Gov. Jeb Bush: Absolutely. We, look Florida had at the time, I created probably the most radical reforms of any state. Other states like Louisiana and Indiana have followed suit but ours was the first, and it was a mighty struggle.

And we realized, as we went along that there should be, we always needed to have accommodations, but one of the things I insisted on was that people with disabilities had to participate in the accountability system. If you exclude them, then that result is they don’t get the attention.

But, in our system, where we graded schools based on student learning, and every kid counted, we had the greatest learning gains with people with disabilities because they mattered. And so it was a powerful lesson of accountability.

The second thing that I realized was that public schools weren’t the perfect setting for every family. So we created the first statewide voucher program for kids with disabilities. And in Florida if your IEP is not being met, a mom or a dad can unilaterally take the state and local dollars, and use those dollars to go to a private school. 30,000 families take advantage of that program. It’s by far and away the largest voucher program for kids with disabilities.

And, as I said, in terms of the public schools, the greatest learning gains are in Florida. And so the lesson learned is when you give people, empower people rather than systems or government or monopolies or bureaucracies, you empower families. You’re going to get a better result.

The RespectAbility Report: How does that work for veterans or for people with mental health differences, your views about disability issues?

Gov. Jeb Bush: It works in the following way: I just think the institutionalized ways of past need to be, we need to be gone with them.

The RespectAbility Report: What do you mean?

Gov. Jeb Bush: I think we need to move to a community-based model, back to the notion of empowering people, and allowing people to take advantage of the services that are out there without saying which form you have to fill out or which program you have to go to because this is the only one we’re going to fund. If you turn the dynamic away from the supplier to the receiver, you know from the provider to the customer if you will of the service, you’re going to get a much more customized result.

In the 21st century world we live in you can do this. You can do this as it relates to, across the policy spectrum. Whether it’s health care, or job training, or education for sure, in every case, how we treat veterans, giving them access to the care that they deserve, giving them the choice to make these decisions is really important.

The RespectAbility Report: That’s terrific Governor. Anything else you want voters with disabilities to know about? We’re one in five Americans. What else do you want us to know?

Gov. Jeb Bush: Well, that I respect every American. That I think everybody should have a chance to make a contribution. That we shouldn’t cast away people, say oh you know life’s not fair, you know get in line we’ll take care of you. That the better approach is to recognize that life is a gift from God. Everybody can make a contribution, and what we need to do is empower families and people to be able to pursue their dreams as they see fit.

The RespectAbility Report: Thank you Governor. We really appreciate it.