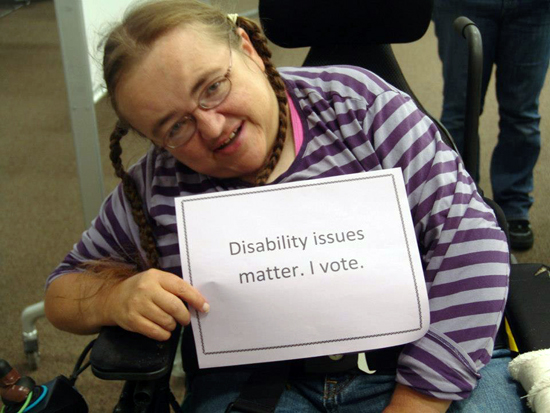 Voters with Disabilities Key to 2016 Campaign

Published by Lauren Appelbaum on January 5, 2016

Clinton’s plan looks at how to address to Autism in a 360-degree method, from early screening outreach and the transition into adulthood with a focus on housing and employment to proper health insurance coverage and a first-ever adult autism prevalence study.

What is most remarkable is that Clinton is just one of numerous presidential candidates to be discussing disability issues. In comparison, during the 2012 cycle, the word “disability” was very rarely even uttered.

Former Florida Gov. Jeb Bush has been talking about autism since his announcement video. Ohio Gov. John Kasich often gets emotional when talking about the subject. Both governors, like some of the other candidates, have proven records on disability issues.

America has 56 million people with disabilities, comprising the largest minority group in America.

“One in five Americans has a disability and the majority of voters have a loved one with a disability. In past elections, we have been ignored. During the 2016 campaign season, we will determine the outcome of the election,” said Jennifer Laszlo Mizrahi, president of RespectAbilityUSA.org, a nonprofit disability opportunities organization.

Candidates on both sides of the aisle are beginning to talk about these issues on a regular basis. From Donald Trump, Marco Rubio, Ted Cruz, Chris Christie, John Kasich and Jeb Bush, among others, on the Republican side, to Hillary Clinton, Bernie Sanders and Martin O’Malley on the Democratic side, presidential hopefuls are answering our questions on employment for people with disabilities, accessibility to events, alarming crime rates against people with disabilities, and many more topics of interest.

The disability communities in the early voting states of Iowa and New Hampshire are encouraged by the candidates’ engagement with them. There are 357,730 Iowans with disabilities, and 166,258 people with a disability in New Hampshire.

Said Mizrahi, “In past elections we have seen the power of ‘soccer moms’ and Hispanics as key swing voters. This year it is America’s largest minority – and the one that anyone can join any time due to accident or illness – people with disabilities. Voters with disabilities, and the people who love and live with them, want candidates that care about opportunities and success for people of ALL abilities.”