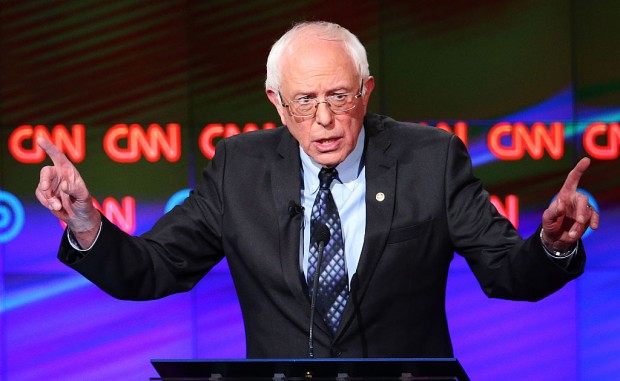 Published by Lauren Appelbaum on March 7, 2016

Washington, March 7 – During last night’s Democratic debate, Sen. Bernie Sanders made a joke about the Republican candidates – but offended many in the mental health community.

“We are, if elected president, going to invest a lot of money into mental health,” Sanders said. “And when you watch these Republican debates, you know why we need to invest in that.”

While many people, including Secretary Hillary Clinton, understood Sanders’ joke regarding the middle-school name-calling and innuendo-laden references at last week’s GOP presidential debate, many within the mental illness community are saying that these are not signs of mental illness. By making this joke, they say, Sanders is showing his ableism.

The Ruderman Family Foundation has called on Sanders to apologize for making this joke.

“Millions of Americans and their families deal with issues of mental health on a daily basis and it was highly inappropriate for a candidate for president to demean their lives by joking about their disability,” Jay Ruderman, president of the foundation, posted on Facebook.

In a clear error of judgment, Sen. Sanders used people with mental illness explicitly as a means to degrade Republicans. The comment drew laughter from the audience, as well as from presidential candidate Hillary Clinton, showing once again how U.S. leaders fail to understand the impact such slurs have against people with disabilities and their families.

Unfortunately, this is the third instance in this current election cycle that a presidential candidate has used people with disabilities in a derogatory and unacceptable manner; first with Donald Trump’s mocking of New York Times reporter Serge Kovaleski and Dr. Ben Carson for his metaphorical slur referring to the Republican Party as having a ‘mental disorder.’

Others in the community have pointed out that Sanders should not be lambasted for this line, as his single-payer healthcare plan would treat mental illness as a disease and be fully covered.

Earlier, mental health came up in the context of mass shootings.

When Gene Knopf, the father of Abigail Knopf, who was critically injured by gun violence, asked a question about this epidemic, he clearly said, “I don’t want to hear anything about tougher laws for mental health or criminal backgrounds, because that doesn’t work.” Both Sanders and Clinton called for gun control.

However, when Sanders said any “lunatic” could “walk into a theater and do something horrific,” he equated mental health with violence. However, just three to five percent of violent acts in the United States are carried out by people with serious mental illness. Furthermore, people with mental illness are more likely to be victims — not perpetrators — of violence.

According to the National Alliance on Mental Illness, approximately one in five Americans experience mental illness.  When a presidential candidate uses words like “lunatic” in this context, it lumps all people with a mental health difference in one category. Doing so perpetuates negative stereotypes and sows the seeds of fear, which drives people to avoid talking about mental health issues.