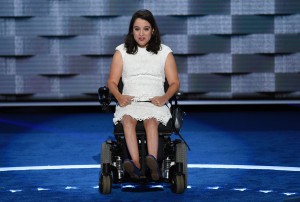 Philadelphia, July 26 – Following a video which highlighted what many see as Donald Trump’s mockery of a disabled New York Times reporter, disability activist Anastasia Somoza rolled onto the DNC stage in her power wheelchair and spoke about her friendship with Hillary Clinton and the Clinton family, a relationship which has lasted more than two decades.

Somoza, who, along with her twin sister, was born with cerebral palsy, first met the Clintons at nine years old. After being invited to a town hall meeting for kids, she boldly asked then President Bill Clinton why her sister, who is non-speaking, could not be in a regular classroom like Anastasia was. Her chat with the president kicked off a flurry of media coverage and her family worked with the Clintons to advance equal, inclusive education as well as healthcare for people with disabilities.

Last night, Anastasia Somoza took to the stage to express her support for Hillary Clinton.

“[Clinton] has never forgotten about people like me,” she stated proudly.  “In a country where 56 million Americans with disabilities so often feel invisible, Hillary Clinton sees me.”

That’s the opposite of how she feels about Republican nominee Donald Trump, who she attacked on his portrayal of a journalist with a disability.

“Trump doesn’t hear me, doesn’t see me, he doesn’t speak for me,” she said to tremendous applause. “I honestly feel bad for anyone with that much hate in their heart.”

Somoza also touched upon other key election issues, such as gender equality, employment and immigration.

“Hillary Clinton sees me as a strong woman, a young professional, a hard worker, and the proud daughter of immigrants.” she said.  “All these aspects of my identity are strengths which will help me affect change.”

Unlike the responses to Brock Mealer, a man who talks about “overcoming” his disability following a car accident who spoke at the Republican National Convention, the Twitter response to Somoza was generally positive.

If you aren’t watching Anastasia Somoza talk about people with disabilities at #DemsInPhilly — may want to turn it on now. Phenomenal.

Pretty great speech by Anastasia Somosa. I like that she keyed in on Trump saying he’s our voice. #CripTheVote #DNCinPHL — Andrew Pulrang (@AndrewPulrang) July 26, 2016

Though her speech was fairly short, Somoza cut right to the heart of the matter.

“When we support access to education and employment opportunities for absolutely everyone, more of us will be able to live happy, independent lives.”

She received thunderous applause and a standing ovation from the audience.