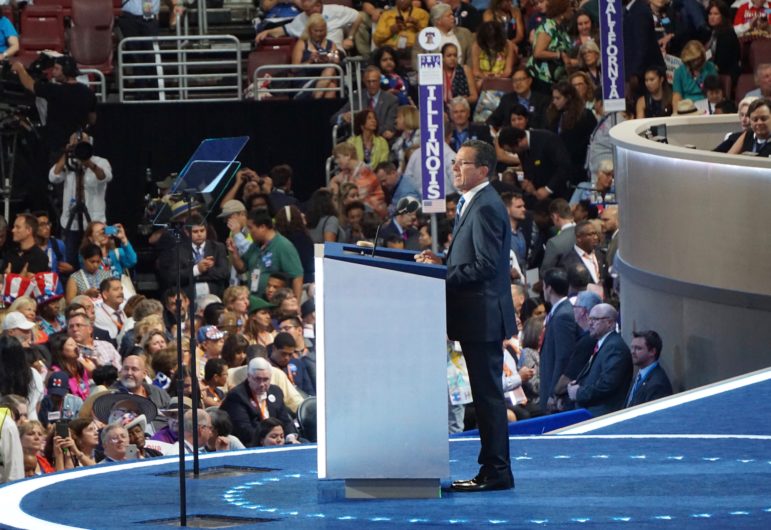 Gov. Malloy Opens DNC by Owning his Own Disabilities

Philadelphia, July 25 – “I am here today to tell you a story of hope,” Connecticut Gov. Dannel Malloy said at the 2016 Democratic National Convention, before speaking about his life and experiences as a person with multiple disabilities.

“It’s a story of a young boy with physical and severe learning disabilities,” Malloy said.

He related his early experiences and how “reading and writing were almost impossible” for him.

“A child thought to be, as the term was used in the early 1960s, ‘mentally retarded’ as late as the fourth grade. A boy who could not tie a shoe or button his shirt until the fifth grade. Someone who knew the harsh words of bullies on the playground and discrimination in the classroom.”

Malloy went on to speak about the difference that his family, teachers and high expectations had on his life. He had “a mother who believed deeply in giving him the opportunities for success,” benefitted from “great teachers” and had “a support system.”

Together, these factors helped him to succeed in school and go on to pursue higher education. Malloy related his experiences as “the first learning-impaired person to take the essay portion of a bar exam orally in three different states.”

These experiences, Malloy said, tell an “American story” about “why we are stronger together.”

“I believe that we must instill hope in every American,” Malloy continued. “It doesn’t matter their race or their gender or … what their learning abilities are. Every child, every American deserves an opportunity to be successful in this life.”

Beyond speaking about his personal experiences as a person with disabilities, Malloy talked about the critical role that state governors play by “solving problems and bringing hope to more Americans.” He touted his record as governor of the Constitution State and his state’s efforts to create jobs, improve access to education, pass criminal justice reforms that “gives non-violent offenders a second chance,” equal pay and paid sick leave.

However, while people with disabilities in Connecticut have increasing job opportunities, the state’s Department of Developmental Services recently has seen significant budget cuts. As the result of a comprehensive budget deal passed by the state legislature in May, more than nine million dollars was cut from the budget for community services for people with intellectual and developmental disabilities and more than 4.6 million dollars was cut for employment services. As reported by the Hartford Courant, these budget cuts included terminations for “occupational therapists, physical therapists and speech pathologists.”

Malloy is one of several state leaders who have spoken publically about the impact that disability has had on their lives. Gov. John Hickenlooper of Colorado, Gov. Peter Shumlin of Vermont and Gov. Phil Bryant of Mississippi all have dyslexia. In various ways, their personal experiences have shaped their political choices.

His speech was the first of many to put the issue of disability front and center on the convention stage tonight in Philadelphia. The governor’s speech touched on issues well known to the 56 million Americans who have disabilities ranging from high expectation to the hope that economic opportunity provides.

EDITOR’S UPDATE, JULY 29, 2016: Since writing this piece, we have been informed that the state of Connecticut is in the process of laying off its entire staff of sign language interpreters. As of June 29, 25 people have been laid off from the Deaf & Hard of Hearing Interpreting Unit within the Department of Rehabilitation Services, with the expectation that the entire staff of 40 people will be out within the coming weeks. The cuts come as part of a restructuring effort to reduce debt in the state budget. Services will no longer be provided by the state and will instead be issued through part-time employees or private providers. In doing so, the state will save approximately $30 per hour per interpreter. These measures leave many people who are deaf and hard of hearing without a voice. Malloy implemented the budget cuts without a transition plan for those who receive ASL services as well as for the interpreters. This affects daily living situations in schools, courts, hospitals and countless other situations. Members of the deaf community, along with laid-off interpreters, took to the streets in protest last week to show their disdain for the recently implemented measures.  They also delivered a petition with more than 13,000 signatures to Gov. Malloy’s office to protest the closing of the state Department of Rehabilitation Services interpreting unit.