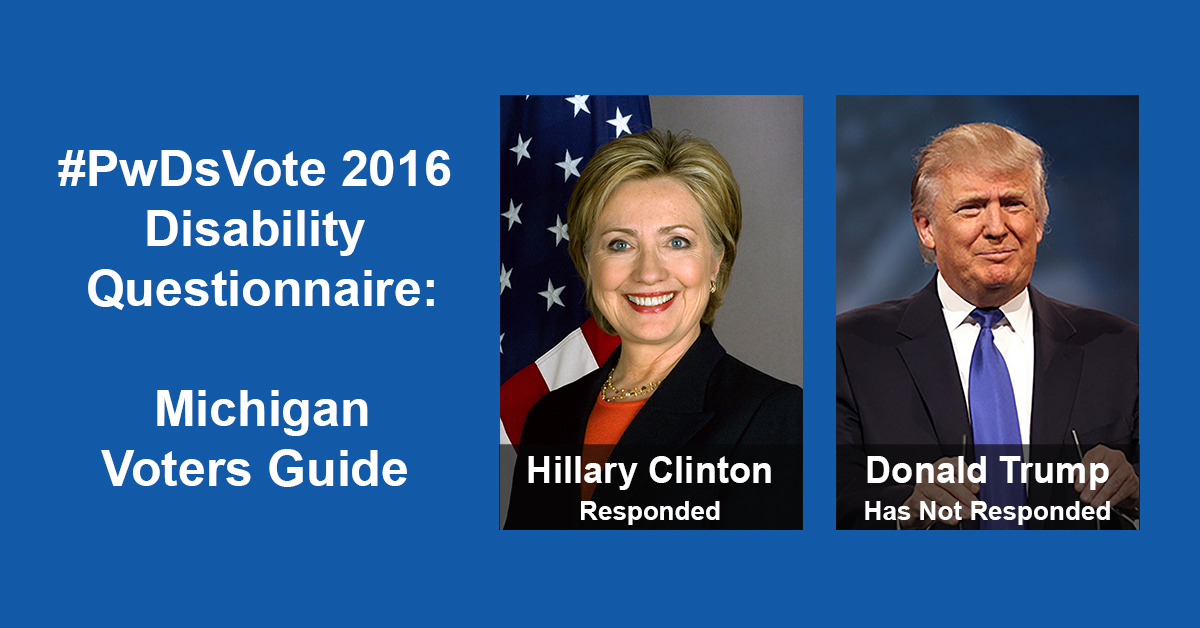 Washington, Oct. 14 – As voters get ready to head to the polls in Michigan, RespectAbility is releasing its Michigan Disability Voter Guide for the upcoming presidential election. Democrat Hillary Clinton has completed the #PwDsVote Disability Campaign Questionnaire, but Republican Donald Trump has yet to do so.

Michigan Needs to Improve Outcomes for Citizens with Disabilities
According to Census data from 2013, Michigan ranks 44th in the country in terms of their employment rate of people with disabilities. Only 29.9 percent of the 684,000 working-age Michiganders with disabilities are employed. Further, there are more than 48,500 youth with disabilities and each year a quarter of them will age out of school into an uncertain future. A good example of the uncertainties facing Michigan’s disability community is the issue of not pulling down the full federal match of funding for VR. In 2014, Michigan Rehabilitation Services had to return $19 million dollars to Washington, D.C., because the state budget failed to come up with adequate matching funds.

Despite poor performance metrics in the past, Michigan has many of the ingredients essential to future success. The state plan includes critical data points, discusses outreach to key businesses, and points to growing sectors to set Michigan on a path to expand job opportunities for people with disabilities. These efforts, combined with the strategic opportunities offered by the Workforce Innovation and Opportunity Act (WIOA), mean that Michigan can invest heavily into improving the competitive, integrated employment outcomes for its citizens with disabilities. But, there remains a staggering 45-percentage point gap in the labor force participation rates (LFPR) between people with and without disabilities in Michigan. This gap will not be closed unless resources are committed to best practices and cost-effective models.

Remember to Vote
Michigan residents can vote for the candidates of their choice either through the standard voting schedule or through absentee voting. The registration deadline was Oct. 11, 2016. For more information, visit: Michigan Voter Registration. The local clerk can help with questions about voter registration, polling place location and working at the polls. Find local clerks here: Find Your Local Clerk in Michigan.

In Michigan, you may vote absentee if you are: age 60 years old or older; unable to vote without assistance at the polls; expecting to be out of town on election day; in jail awaiting arraignment or trial; unable to attend the polls due to religious reasons; appointed to work as an election inspector in a precinct outside of your precinct of residence. Request an absentee ballot no later than 2:00 p.m. on Nov. 5, 2016. After receiving your absent voter ballot, you have until 8:00 p.m. on Election Day to complete the ballot and return it to the clerk’s office. For more information, visit: Absentee Voting in Michigan.