Heidi Heitkamp is a current U.S. Senator for North Dakota. A Democrat, she has served since 2013. She is the first woman in North Dakota to be elected to a United States Senate seat. Previously she worked as the North Dakota Attorney General, and as an attorney for both the EPA and North Dakota’s Tax commissioner’s office. She faces off against Republican Rep. Kevin Cramer in November.

This is important for North Dakota’s 84,500 citizens with disabilities. Only 51.5 percent of the 39,700 working-age people with disabilities in Nevada are employed. Further, there are more than 14,000 youth with disabilities and each year a quarter of them will age out of school into an uncertain future.

RespectAbility is seeking answers from the campaign of Rep. Kevin Cramer, Heitkamp’s opponent.

We are presenting Sen. Heitkamp’s answers in full below. 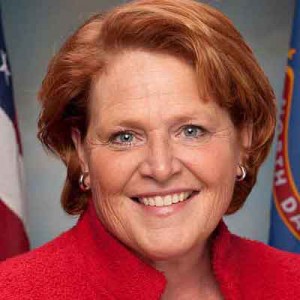 Answer: I have dedicated my career to representing all people, regardless of race, gender, religion, or disability. I will continue to do so as long as I represent North Dakota in the Senate. The issues that affect all people often have an outsized impact on people with disabilities. As I work in the Senate to fix many of the issues that plague us today, like affordable health care, housing, and domestic violence, I do so knowing that work remains to be done to fix these problems for people with disabilities, too.

Question 4: The jobs of the future will largely require post-secondary education. However, on average only 65 percent of students with disabilities complete high school and only seven percent complete college. What policies do you support to enable students with disabilities, including those from historically marginalized communities and backgrounds, to receive the diagnosis, individualized education plan (IEP) or 504 plan and accommodations/services they need to succeed in school and be prepared for competitive employment?

Answer: People who spend time in jail are already at a huge disadvantage when they are released. With the stigma of a criminal record on top of the stigma already placed on people with disabilities, these people are faced with a hill too steep for anyone to climb. We must reform our criminal justice system, and that includes making improvements to programs that help people with disabilities gain skills and mental health support once they are out of prison.

Answer: Providing affordable health care to North Dakotans has been a pillar of my time in the Senate. We must strengthen Social Security and Medicaid. We must keep insurance companies from charging premiums based on pre-existing conditions. These are the things I have fought for, and I will continue to fight for them moving forward.

Answer: North Dakota, in particular the western half of the state, is no stranger to housing shortages. Affordable housing is one of life’s most basic need. People with disabilities often already have limited options, that is only exacerbated by general housing shortages. To the extent that Medicaid currently provides a disincentive for people with disabilities to find employment so that they can have a personal care assistant, I would support reforming Medicaid to change that.

Answer: I make efforts to ensure that I am accessible to all North Dakotans regardless of whether they have a disability. If any constituent has a problem accessing one of my offices, event, or my website, I will be happy to figure out an accommodation for them.