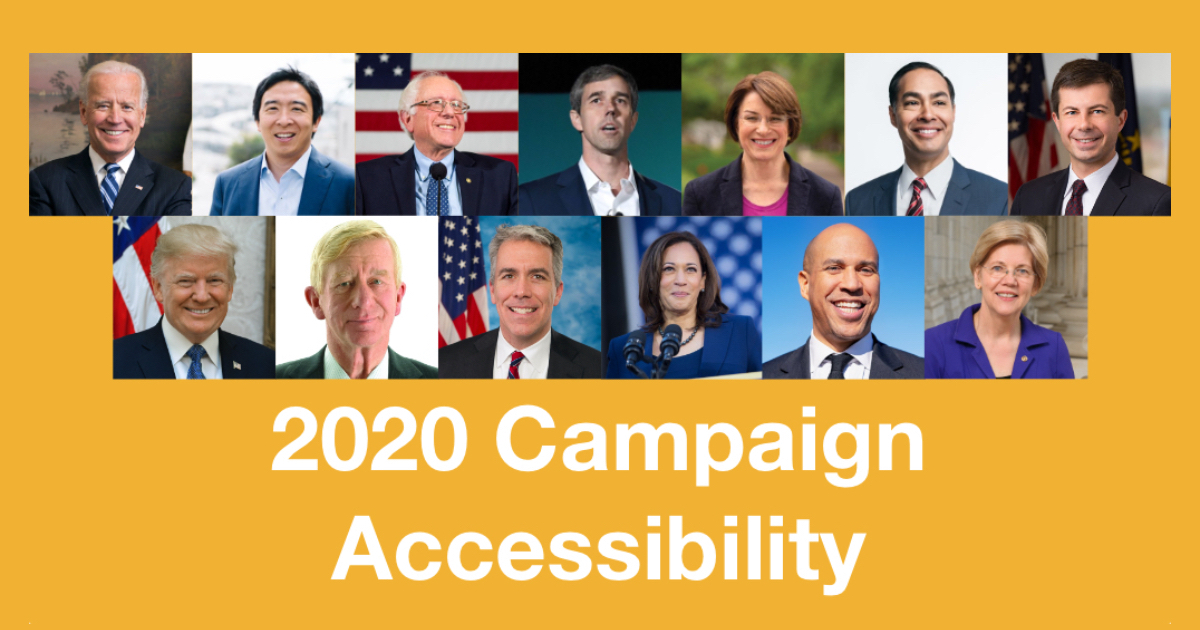 Washington, D.C., Sept. 12 – Nearly three months after a report by the Miami Lighthouse for the Blind and Visually Impaired found that all of the presidential candidates’ websites block democratic access to voters who are blind or have low vision, an update finds that still none of these websites – Democrat or Republican – are fully accessible. However, the Miami Lighthouse for the Blind found that many of the candidates’ websites do show improvements in accessibility.

The organization issued a challenge for the candidates in June: “ensure their websites are fully ADA compliant and immediately put an accessibility statement on their page.” Four of the candidates now have an accessibility statement on their websites, including both a live email address and phone number that users can contact for additional assistance: Joe Biden, Cory Booker, Elizabeth Warren and Andrew Yang. Since the report first launched on June 26, 2019, each of these four presidential campaigns also have contacted Miami Lighthouse for Blind for counsel in updating their websites.

RespectAbility, a nonprofit that runs www.TheRespectAbilityReport.org, a publication on the intersection of politics and disability, also reached out to all of the campaigns about all aspects of accessibility – from websites to social media to live events. Each campaign was offered free training in how to make their campaigns accessible to people with a variety of disabilities. Nine of the campaigns so far took RespectAbility up on the offer of training.

Furthermore, specific to the website study, according to the CDC, more than 12 million Americans 40 years and over have vision impairment, including one million who are blind – meaning that ensuring website accessibility should be a priority for all presidential candidates. The Miami Lighthouse noted that Andrew Yang, whose website currently is the most accessible for blind users, had the most improvement overall. Yang, Biden and Booker are the only candidates to have scored higher than a 3.00 out of 4.00. On the other end, Amy Klobuchar’s website dropped in accessibility; the website has new video and image content that was not accessible and lacked alt text. In addition, the only other websites to not show some level of improvement are those belonging to Donald Trump and Bernie Sanders.

“While it is encouraging to see that some of the presidential candidates are making changes to make their websites more accessible to blind voters like me, we still have a lot of work to do,” said Virginia Jacko, CEO, Miami Lighthouse for the Blind and Visually Impaired. “When the next presidential debate takes place on Thursday, I imagine the candidates will call upon viewers to visit their websites. Millions of blind and visually impaired voters will still have a hard time accessing them, whether it’s reading about their platform or making a donation to their campaigns. In 2019, it is unacceptable for anyone to be shut out of the political process. In a supposed age of inclusion, making websites accessible to the visually impaired must be a priority.”

*Was not running during the first Miami Lighthouse analysis in June.

Will Candidates Talk About Disability Issues at Tonight’s Debate?

“It is vital for the democratic process to be open to all people and all means all – including people with disabilities,” said Lauren Appelbaum, managing editor of The RespectAbility Report. “Ensuring accessibility and having meaningful disability policies are just two of the important issues candidates need to address.”

The word “disability” was not mentioned during the June or July presidential primary debates. All policy plans – including those focused on education, employment, the environment and others – affect people with disabilities. Yet, the candidates have yet to meaningfully discuss this from the debate stage thus far.

About RespectAbility: A nonprofit, nonpartisan organization, RespectAbility fights stigmas and advances opportunities so that people with disabilities can fully participate in all aspects of their communities. RespectAbility does not rate or endorse candidates. It publishes www.TheRespectAbilityReport.org, nonpartisan political commentary on U.S. elections with a focus on disability issues. View more coverage of 2020 presidential candidates.