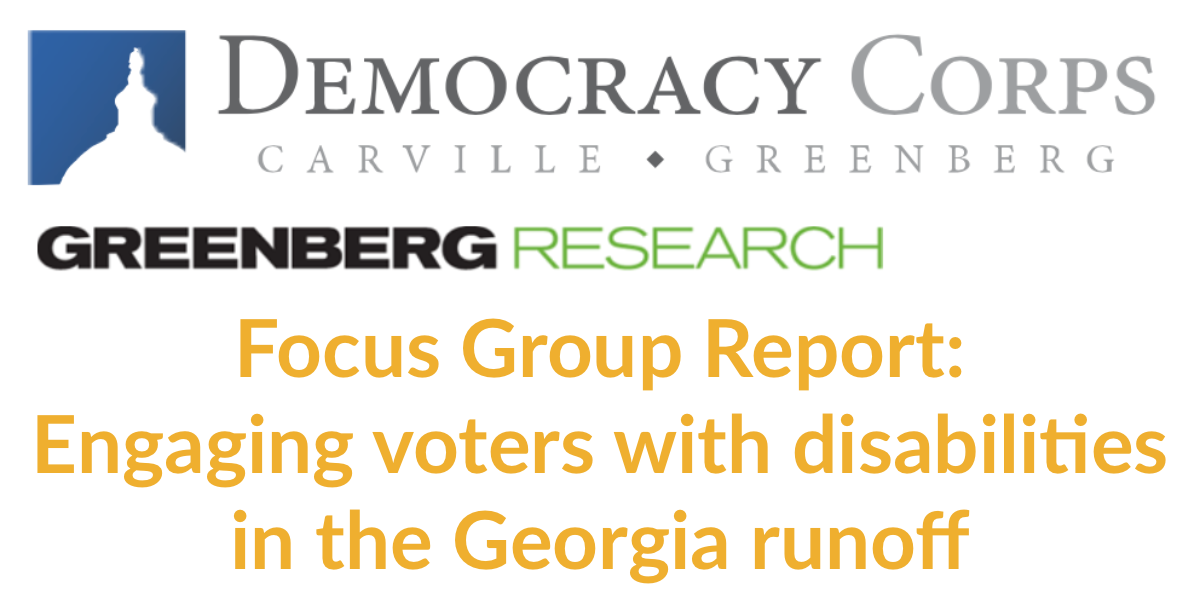 Washington, D.C., Dec. 22 – Control of the United States Senate depends on two runoff elections in the state of Georgia. While a lot of money is being spent by the candidates and other organizations to get out the vote, a new report about two focus groups indicates that Georgia’s disability community is not getting enough attention in these races. In fact, at the time these focus groups were conducted, none of the participants were able to recall having seen or heard anything from the Senate candidates regarding people with disabilities.

On behalf of RespectAbility and the Georgia Disability Vote Partnership (GDVP), Greenberg Research and Democracy Corps conducted 2 sets of online video focus groups among registered voters with disabilities in Georgia; one group of white women on December 16th and one group of Black women on December 17th. According to Greenberg Research and Democracy Corps, “for voters with disabilities, health care costs and accessibility are the dominant issues right now.”

A lot of money is being spent on nonpartisan voter communications and turnout in Georgia, but little of it is accessible or targeted to voters with disabilities who can make the difference. None of the candidates’ websites are accessible to the 254,972 Georgians who are blind or low vision. Additionally, very few of the candidates’ videos have captions, making them inaccessible to the 328,000 deaf and hard of hearing Georgians.

According to the 2019 Annual Disability Statistics Compendium, the total number of Georgians with disabilities is 1,246,077, making up 12.1 percent of the total state population. 2018 employment data show that there are 658,811 working-age people with disabilities in Georgia. In the economic expansion prior to the COVID-19 pandemic, only 238,875 (or 36.3 percent) of those Georgians had a job.

It’s important to note that in other Senate and Governor races around the country, the candidates who reached out to the disability community – regardless of their party – won. Indeed, President-elect Biden reached out in a big way to voters with disabilities, including in Georgia, which paid off for his campaign.

Learn more about how political candidates and campaign staff are reaching out to voters with disabilities on The RespectAbility Report, nonpartisan political commentary on U.S. elections with a focus on disability issues: https://therespectabilityreport.org.

RespectAbility is a nonprofit, nonpartisan organization that fights stigmas and advances opportunities so people with disabilities can fully participate in all aspects of their communities. RespectAbility and The RespectAbility Report do not rate or endorse candidates.