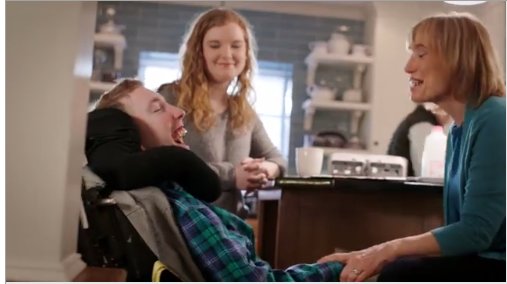 Published by Lauren Appelbaum on May 4, 2016

Washington, May 4 – New Hampshire Gov. Maggie Hassan (D), who is running for the Senate against Kelly Ayotte (R), is out with a new ad that may just take your breath away.

Hassan’s ad, her first of the season, tells the story of her son Ben, who has cerebral palsy, is a wheelchair user and is nonverbal. Through personal stories and detailing the challenges facing Ben and Hassan’s family, she becomes relatable to the average voters as a mother looking out for her son. She explains how her son is the reason she became involved in politics.

As the Washington Post’s Chris Cillizza points out, the ad “grounds Hassan’s reason for going into public service in her own life story.”

Hassan praises all the families that came before hers “who made his inclusion possible.”

“That’s one the of the reasons I got involved in public service,” Hassan says in the ad, “because it made it so clear to me how much you can accomplish when you work together.”

“In an era in which people dislike politicians and believe that all of them are in it to sate a need for power, Hassan’s ad provides a powerful antidote to that cynicism,” Cillizza writes.

Hassan has served as New Hampshire’s Governor since 2011 and previously served in the New Hampshire Senate from 2005-2011.

During the presidential primary season, Hassan campaigned on behalf of Secretary Hillary Clinton. In a written statement provided by her Communications Director Aaron Jacobs, Hassan detailed her personal reason for supporting her due to Clinton’s work for the Children’s Defense Fund in ensuring children with disabilities could attend school.

“I have a son, Ben, who has cerebral palsy. When he was 3 years old, Ben went off to public-preschool in Exeter, New Hampshire. But if Ben had been born a generation or two earlier, we would have been pressured to put him in an institution.

Two decades before Ben went to preschool, Hillary Clinton graduated law school and went to work for the Children’s Defense Fund, where she discovered that many children who were not going to school had disabilities — and schools didn’t know how to educate these children.

Hillary Clinton went to work, not only advocating for the right of all children to have a free and appropriate education, but working to convince skeptics that people like Ben could learn. She also worked with educators to give them the tools necessary to include kids like Ben in the classroom. And as a result of the work of advocates like Hillary, Ben is an Exeter High School graduate.”

Previously, Hassan worked as a corporate attorney for Brigham & Women’s Hospital in Boston, advocating for people with disabilities during the 1990s. In 1999, then-Gov. Jeanne Shaheen appointed Hassan to serve on New Hampshire’s Education Adequacy Commission.

While in the New Hampshire Senate, Hassan sponsored Connor’s Law that required New Hampshire health insurance companies to provide coverage of evidence-based, medically necessary autism therapies, such as applied behavior analysis (ABA) therapy. She also supported a bill that permitted children in New Hampshire to stay on their parents’ health insurance until they were 26 years old.

As Governor, Hassan signed a law banning paying people with disabilities lower than the minimum wage.

“This generational progress toward including every single one of us into the heart and soul of our democracy, our communities, our economy, has a great ripple effect, not only for individuals and not only for their families, but for our economy, too,” Hassan said.

Ayotte was first elected to the U.S. Senate in 2010 and previously served as Attorney General of New Hampshire from 2004-2009. She voted in 2011 for theConvention on the Rights of Persons with Disabilities (CRPD), which ultimately failed to be ratified due to less than two-thirds of the necessary Senate vote.

In 2015, the U.S. International Council on Disabilities (USICD) awarded Ayotte with the Dole-Harkin Award for her support of the CRPD and the TIME Act. USICD called Ayotte a “strong leader” and “longtime advocate for people with disabilities.”

The people of New Hampshire have two champions for the rights of people with disabilities vying to represent them in the Senate. Hassan and Ayotte have the opportunity to bring these issues to the forefront and ensure they are treated as priorities.

America has 56 million people with disabilities, more than 20 million of whom are working age. Polls show that the majority of voters either have a disability or a loved one with a disability. Voters with disabilities and their families are up for grabs — and the actions that campaigns take to reach out to these voters can make the difference between winning and losing.