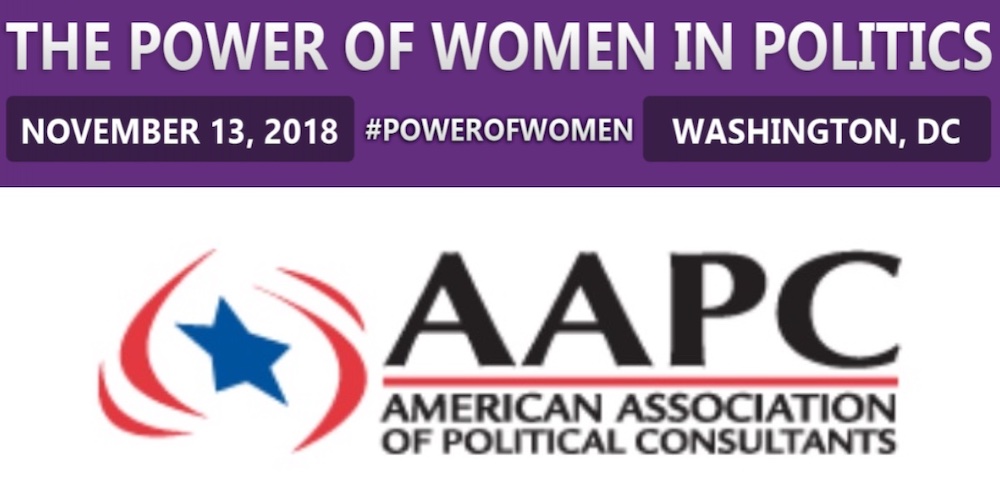 The Power of Women in Politics

Washington, D.C., Nov. 13 – The American Association of Political Consultants (AAPC) conference about the power of women posed a key question: “Was it the year of the woman?” There were four panels of distinguished women consultants who spoke on “the year of the woman,” the women voting bloc, the founding of consulting firms by women, and the look ahead to 2020. The consensus – it turned out to be the year of the democratic woman.

Celinda Lake, the founder of Lake Research Partners, who previously conducted a poll on the attitudes of disabilities with voters, gave the best answer of the day. “I am sick of the year of the woman,” she said. “I hope we get a decade.”

This simple comment gave ammunition to the rest of the conference. The feeling of optimism in the room was palpable as people looked to the future and imagined a “decade of the woman.”

Panelists discussed the increased number of women who ran for office, and the unprecedented number that won in the midterm elections. They talked about the pink wave that swept the nation and were exuding the excitement that many American women have been feeling. Hearing the rise of not only women candidates and newly elected representatives, but also the rise in women serving as consultants and staff, gave me hope.

A true year of the woman should represent all women, not just Democratic women. It should be the year of all women. Panelists cited races across the country where women who ran as Republicans lost primaries despite being the stronger candidate. This phenomenon, though still present for Democratic women, was not as pervasive. The 2018 elections certainly sparked a change. However, it is not enough for women to only be represented on one side of the aisle.

It also is important to note that women with disabilities were not mentioned during any of the panel discussions. Since approximately twenty percent of women have disabilities, their current underrepresentation in government is important to discuss. According to a poll from Lake Research Solutions, people with disabilities and the people who care about them make up just over fifty percent of the electorate. They also are more likely to support candidates that support disability issues. This poll was conducted in late 2016 for RespectAbility, a nonprofit organization fighting stigmas and advancing opportunities for people with disabilities. This is yet another reason I hope it is not yet the year of the woman. Until women with disabilities are considered in these conversations, we will not have an inclusive year of the woman.

As partisan arguments broke out among the final panelists, I think that the conversation could have been directed to a more productive place. The women at the conference were there with the same intentions in mind: working so that women can have equal rights and representation in government. Instead, the panel erupted into heated discussions about party politics. Rather than argue, the panel could have talked about intersectionality and the issues that women from different demographics, like those with disabilities, face.

The day as a whole was enlightening. The optimism exuding from the panelists and audience was warranted, but I think women have more work to do. By empowering both Democratic and Republican women voters and consultants, we can make a change for the 2020 election. We also need to consider women from all backgrounds, including those with disabilities. Women across the aisle need to come together to find ways to make it the year, or the decade, of all women.